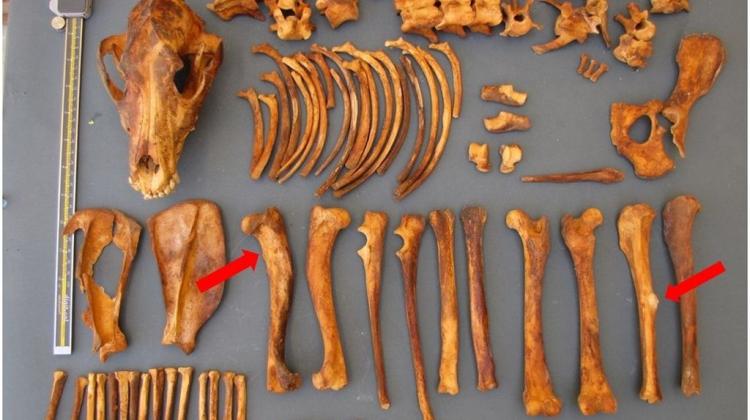 Traces of one of the most malignant and deadly cancers that kill modern dogs, osteosarcoma, have been discovered by Polish archaeologists in Egypt. "This is the oldest and the only find of this type" - told PAP archaeozoologist from Poznań, Dr. Marta Osypińska.

The discovery was made during archaeological excavations at Berenike, the ancient port on the Red Sea. Several years ago, researchers (including Polish participants of the international project) discovered an approx. 2 thousand years old pet cemetery. "This place is unique in Egypt" - said Dr. Marta Osypińska from the Institute of Archaeology and Ethnology PAS in Poznań. In addition to dogs, animals buried there include apes, baboons and cats. A total of one hundred burials provided researchers with information about the close relationship that people shared with domestic animals already in antiquity.

The remains of a dog that suffered from cancer were wrapped in a mat of palm leaves and then covered with an amphora from Cyprus, cut in two halves. The vessel allowed archaeologists to accurately estimate the age of the burial of the 70s of the 1st century AD.

The fact that the animal suffered from a particular variety of cancer is evidenced by characteristic lesions on the tibia near the knee and the left humerus at the shoulder joint.

Osteosarcoma is now one of the most malignant and deadly cancers killing modern dogs - explained Dr. Osypińska in an interview with PAP. It is considered a genetic disease, affecting especially dogs that have a familial predisposition to the disease. Changes initiating the formation of a tumour may also appear as a result of exposure to environmental or biological factors.

The discovery of evidence of the occurrence of osteosarcoma in dogs living even two thousand years ago indicates that the emergence of this disease is not due to modern factors, such as pollution, or the advanced level of dog breeding, as some scientists believe.

It is a highly malignant tumour with 100 percent mortality in untreated animals. Its cells quickly spread throughout the body, causing metastases in the lungs and other organs. "This painful condition is incurable even with today\'s advanced methods used in veterinary oncology" - emphasised the researcher.

The dog was clearly different from the local animals - said Dr. Osypińska. It was much larger than those found locally: more than half a meter tall, with a very large skull and massive body.

"There are many indications that it was one of the oldest archaeologically recorded heavy molossoid dogs, the ancestors of today\'s breeds such as boxers, bulldogs, dogs, Rottweilers, mastiffs" - suggested the archaeozoologist.

The dog\'s last meal was large marine fish and goat meat - perfect state of preservation of the animal allowed to determine this detail.

"We hope that the discovery of traces of the disease in a dog that lived two millennia ago, will contribute to progress in the study of this type of cancer and its causes. For this purpose, we have secured samples for histopathological and genetic studies" - added Dr. Osypińska.