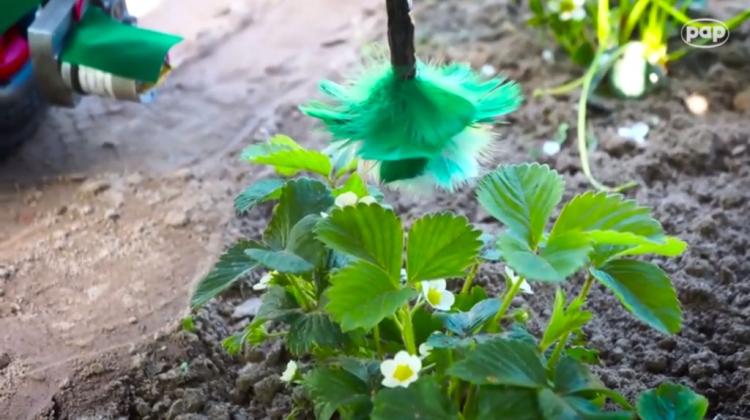 B-Droid is possibly the world\'s first autonomous pollinating robot. The device was built at Warsaw University of Technology and has already been tested on the crops of strawberries and garlic. It can autonomously move between the rows, find flowers and transfer pollen between them.

"We have built a demonstrator autonomous pollination device. So, in other words, a device that can autonomously find a flower, collect pollen and transfer this pollen on the stigma of the same or another flower of the same species" - said in an interview with PAP the creator of B-Droid, Dr. Rafał Dalewski of the Faculty of Power and Aeronautical Engineering of Warsaw University of Technology.

Movements of B-Droid are not controlled remotely by man - the device operates autonomously. B-Droid, which is a wheeled robot, moves over the crops and by making movements with a whisk it moves pollen between flowers. The robot must be gentle in its work, so as not to damage the flowers. Dr. Dalewski explained that the most important system component is software. It allows the robot to find the flower and determine its location in space.

"This year, we already ran tests on two types of crops: strawberries and garlic. During these tests, we were able to carry pollen from flower to flower" - said Dalewski. He added that the efficiency of these tests would still have to be analysed. He noted that the robot did not damage the flowers, which it pollinated.

The scientist argues that a wheeled device is best to pollinate some plants because it consumes little energy and is cheap to operate. "In some crops - for example in orchards - aerial vehicles would be more appropriate" - said Dr. Dalewski and added that he and his team were already working on small flying devices, which would be able to carry pollen from flower to flower. These, however, are more advanced solutions, for which we will have to wait a little longer. Scientists from Warsaw University of Technology are also thinking about options for greenhouses - it would be a solution related to the construction of the greenhouse.

Robots will give more control over the process of pollination. Insects pollinate in a more random manner. B-droid would transfer pollen according to its programming - for example from one row to a specific, different one. This would be important, for example, for the development of new plant varieties. In the future, mechanical pollinators could also relieve insects in the most dangerous tasks.