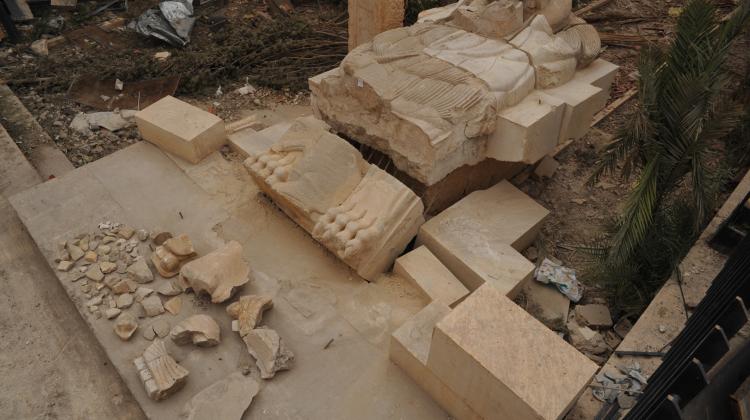 Lion statue from the temple Allat is in a better shape than the scientists assumed, photo by Bartosz Markowski

Archaeologists from the University of Warsaw (UW) worked in Palmyra from 7 to 17 April. They went there at the invitation of the Directorate-General for Antiquities and Museums in Syria. They presented the results of their work at a press conference in Warsaw.

"We were the first foreign specialists in the field of archaeology and conservation to arrive in Palmyra shortly after it was recaptured from Islamic State" - said in an interview with PAP art conservator Bartosz Markowski, who was in Palmyra with archaeologist Robert Żukowski of the Centre of Mediterranean Archaeology of the University of Warsaw.

For a week, Polish archaeologists searched through thousands of fragments of monuments that belonged to the museum in Palmyra, destroyed by the war. Out of about two hundred sculptures and bas-reliefs, they were able to find most of the fragments of about 130 monuments. "Quality of their future conservation depends on these actions - whether in the future we will see broken, incomplete, but original monuments in Palmyra, or their more or less successful reconstructions" - said the expert.

Currently the monuments are still in the museum; they are ready to be put in boxes and evacuated to a place where they will be subjected to restoration.

"Unfortunately, most of the objects in the museum have been destroyed - out of about two hundred sculptures located on the ground floor, only four survived intact. The purpose of our expedition was to collect as many fragments of the broken sculptures as possible. Their parts were mixed with rubble, broken glass and pieces of furniture. The museum building is in a terrible condition, it was bombed several times. Our key objective was to select fragments of sculptures, so that they are not removed during the repair work" - said Markowski.

Also involved in the project were Syrian restorers and archaeologists who rescued mosaics destroyed during the bombing and inventoried the items in storage.

Polish conservator explained that the main damage to the monuments consisted of breaking of details of figures with hammers (faces and hands or mouths of animals depicted in the works of art), which the fundamentalists destroyed for ideological reasons. "These are portrait presentations Palmyra was famous for. They were unique monuments" - added Markowski.

Poles have also conducted reconnaissance of the ruins of the ancient city. They pre-estimated the scale of the destruction of temples Bel and Baalshamin and the Arch of Triumph.

"I\'m not an architect, but I think that there is a lot to salvage. The structures are fallen, but their building blocks are still there. It does not change the fact that the reconstruction will be a huge investment - said Markowski. - Their condition will not change in the near future time - urgent and immediate action is not necessary in this case - in contrast to the museum, where there were many broken and mixed fragments of sculptures. it was important to avoid accidental removal of fragments of sculptures with debris".

During the stay of Polish experts, the action of the Russian sappers demining excavation site continued. This area is still inaccessible due to numerous unexploded bombs.

Markowski brought the good news about the symbol of Palmyra - lion statue from the Temple of Al-lāt, discovered during Polish excavations, which for decades stood in front of the entrance to the museum. Scientists feared that it was completely destroyed.

"I expected that was blown up into dust. The lion, however, is still intact, only knocked over, probably with a bulldozer or other large machine. Reinforced concrete structure, which sustained it, broke, but all the stone elements anchored to it are still together. The mouth suffered most damage. It will certainly be possible to set the sculpture again and restore it, but traces of damage caused by the crisis will forever remain visible" - says Markowski.

Nearby contemporary Arab city - Tadmor, which was a base for tourists to ancient ruins, is deserted. "Houses, hotels, shops, souk - the marketplace, restaurants - are destroyed. Only the Syrian and Russian army are stationed in the city. Former residents comeback only to recover the remainder of their possessions" - said Markowski.

"We received words of sincere kindness and unusual happiness from Syrians that someone was interested in the issue, that they were not left alone. They really appreciate us, Poles, especially now" - Robert Żukowski told reporters.

Markowski said that return to Palmyra is not scheduled yet. "It depends on the Syrian authorities and the international authorities that will prepare conservation projects. What we have done is an opening, a prologue to the preparation of such projects" - Markowski told reporters.

"Palmyra will never be exactly as we remember it. As a consolation, we must say that what we remember is not as it was in ancient times - that is obvious. First of all, so far we have unearthed no more than 20 percent of the ancient city. The rest is still safely underground and in the future our successors will probably enrich the collections of the museum in Palmyra and show new monuments of this ancient civilization" - former Director of the Centre of Mediterranean Archaeology Prof. Michał Gawlikowski said during the press conference.

Research in Palmyra was initiated by the pioneer of Polish Mediterranean archaeology, Prof. Kazimierz Michalowski. The expedition from the Centre of Mediterranean Archaeology of the University of Warsaw worked there from 1959 to 2011. Later, the work was suspended due to the outbreak of armed conflict. Monuments of the ancient city became a target of Islamic State in 2015. Palmyra was primarily known for scenic, monumental stone architecture - long colonnades and numerous temples dedicated to various deities. The city became a UNESCO World Heritage Site in 1980. It was an important tourist attraction in Syria.

Syrians presented a proposal to return to Palmyra to the Poles in early April, during the conference "The Poles in the Middle East" at the UW.