A window to prehistoric beliefs - the sanctuary of Bolków 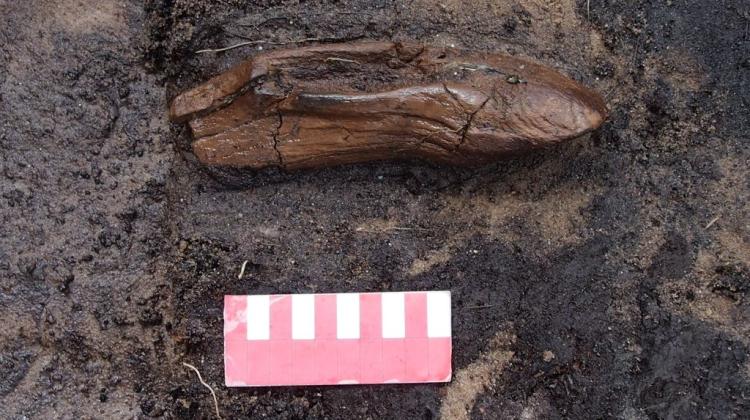 Figures dressed in the furs, chanting monotonous song emerge from the shadows and clouds of smoke. Wearing masks and animal antlers on their heads, they carry small bundles... Perhaps that is what the rituals performed many thousands of years ago near today\'s Szczecin looked like.

We will probably never know the details of the rituals. However, all indications are that the discoveries made by Prof. Tadeusz Galiński from the Szczecin branch of the Institute of Archaeology and Ethnology PAS are unique in Europe. Archaeologists began to study the site in 2012. Initially they did not realize what they were dealing with - they simply stumbled upon the remains of huts. They thought it was a typical settlement of hunters from before 9 thousand years. However, further finds were becoming more and more intriguing.

Research quickly focused on the area of a circle with a diameter of approx. 6 m, where scientists encountered mysterious structures. The main element of the site turned out to be a trapezoidal building with built of poles, surrounded by an arch of stones placed at equal distances from each other. There were also sharpened yew sticks driven into the surface in the shape of a horizontal figure similar to the Big Dipper - a fragment of the constellation Ursa Major. At the time when the huts were used, there was a lake in their vicinity. From there, from a high slope, there was a panoramic view of the surrounding countryside. "On clear days, it had to be a very good place to observe the stars" - added the scientist.

According to Prof. Galiński, everything indicates that this place was a sanctuary. This is further evidenced by discovered objects: wooden censer, which was used for ritual smoking of the place, people and objects in order to drive off evil spirits, and a bundle of pieces of wood, bark, herbaceous plants and animal bones, which, according to Prof. Galiński, should be interpreted as a shaman\'s offering. "Sacrificial offering were an expression of belief in supernatural powers and forces of nature. Their purpose was to appease deities. They were made on behalf of all residents and members of the group with the participation of the spiritual leader" - said the researcher.

Inside the sanctuary researchers found several large stones - almost each of them different. Among them they were: syenite, diorite, granite, quartzite, sandstone and gneiss, and even rare in Pomerania red marble and green syenite. A complete surprise was the discovery of the unknown in this region jet, also called black amber, and volcanic rock, pumice.

"This extraordinarily rich collection of stones is unique among the previously known Mesolithic sites, located both within the vast European Plain, and in the zone of the foothills and highlands. These stones had to be brought to the site in Bolków, and not only from the surrouding area (...), but also from distant lands, the best example of which is hornfels, which occurs closest in the Giant Mountains and the Harz Mountains" - explained Prof. Galiński in an article published in the journal " Archeologia Polski" ("Archaeology of Poland"). Interestingly, the stones show signs of forming.

Scattered inside the sanctuary were numerous items made of wood, antler and stone. Their nature, according to Prof. Galiński, betrays functions directly or indirectly related to the rituals - for example, they include a characteristic cane with unusual shape, a wood pendant, and even an object is made of birch bark, which is interpreted as fragment of a ritual mask.

Alleged relics of a sanctuary discovered in Bolków have been preserved in excellent condition, thanks to the favourable natural conditions in which the finds remained: peat and sand. And "(...) huge amount of diverse information contained in the extracted sources means that they bring a new quality into the research on culture of hunting communities from the Early Holocene on the European Plain" - says discoverer.

Detailed description of the study of the unusual site in Bolków in 2012-2014 has been published in the latest issue of "Archeologia Polski" (LX: 2015) in an article by Tadeusz Galiński "Shaman sanctuary from the Mesolithic period in Bolków on the lake Świdwie in Pomerania". Field research and laboratory tests of the site have not been completed yet. Scientists expect more intriguing discoveries and findings.