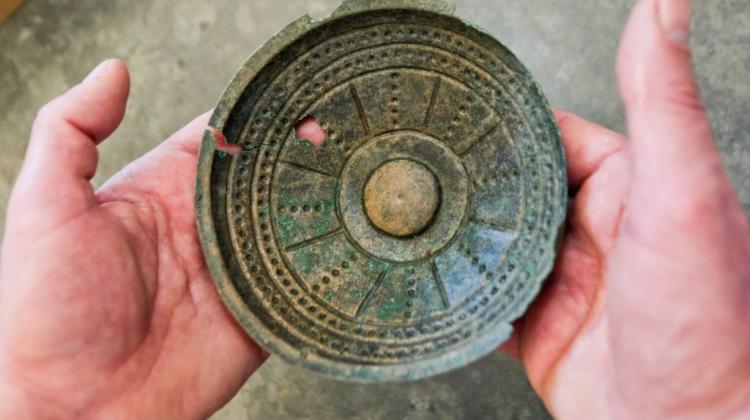 Some of the finds presented at the Jan Dekerta Lubuskie Museum in Gorzów Wielkopolski. Photo: PAP/ Lech Muszyński 17.03.2016

Treasure of bronze objects has been discovered on the outskirts of a town in Lubuskie Province. The objects are probably associated with the Lusatian culture and period of the Bronze Age - head of the Gorzów branch of the Regional Office for the Protection of Monuments Błażej Skaziński told PAP.

The collection of artefacts, initially dated to the IV-V period of the Bronze Age (1100-700 BC) consists of several dozens of items, including those associated with the religious beliefs and rituals of the community that produced them.

The collection consists of 5 bronze vessels, 6 wheels and 6 other parts of a cult cart, as well as 24 buttons. In addition, the find was accompanied by fragments of pottery from the vessel in which the deposit was placed.

"The presence of parts of a cult cart determines the special importance of the find. These types of monuments are very rare. The objects were probably hidden in an emergency situation and the deposit has not been recovered until the present day. The objects were not associated with burial" - said Skaziński.

The treasure was found on the edge of a field by a family on a walk. The finders reported and handed the find to the Lubuskie Regional Conservator of Monuments. Shortly thereafter, an archaeologist carefully examined the place of discovery of the objects.

According to the law, the monuments are the property of the State Treasury. They have been deposited in Gorzów museum, where soon they will be subjected to specialized research and conservation work.

The discovery is yet another proof that several thousand years ago in Central Oder Region was inhabited by the communities with rich culture, beliefs and high level of craftsmanship.