When vineyards bloomed in Sudan... 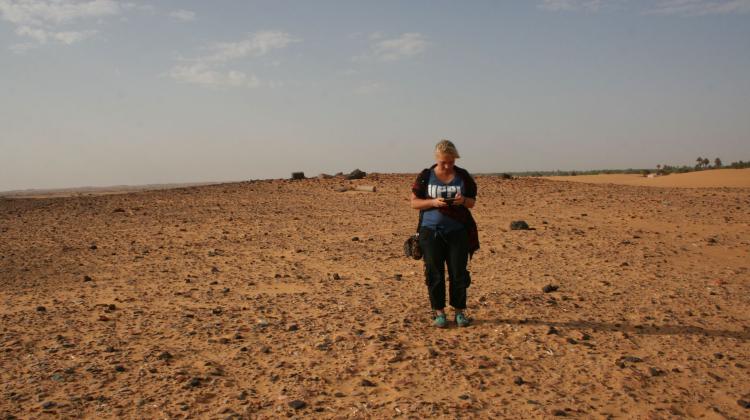 Poznań archaeologists discovered settlements, towns and cemeteries from the Middle Ages during research in northern Sudan, in the area of the Letti Basin. Now, researchers intend to examine one of these places in more detail.

In the mid-seventh century, Egypt was conquered by Muslim armies. The pressure of the invading army, advancing south along the Nile Valley, stopped the Christian kingdom of Makuria. The relics of this civilization have been discovered by Poznań archaeologists in the area of the Letti Basin, about 350 km north of Khartoum. Makuria was a powerful kingdom, which existed from the sixth to the fourteenth century between II and V cataracts of the Nile. For several centuries its power reached even farther north almost to the modern Aswan.

"The southern part of the kingdom of Makuria is fairly well known thanks to the excavations conducted by the Centre of Mediterranean Archaeology of the University of Warsaw in Ghazali, Banganarti and Dongola - the latter was the capital of the kingdom. The northern is still +terra incognita+" - told PAP Dr. Dobiesława Bagińska from the Archaeological Museum in Poznań, initiator of the research project in the Letti Basin.

In autumn 2015, scientists carried out extensive reconnaissance in the Letti Basin, in the area of approx. 150 km2 - this area was previously very poorly surveyed by archaeologists. Several sites in the area were reported by Krzysztof Grzymski of the Royal Ontario Museum.

Now archaeologists confirmed the presence of previously known sites, but also discovered a number of previously unknown relics of settlements and cemeteries, mainly from the period of the kingdom of Makuria. These findings confirm the reports of the Arab travellers - more than 1,000 years ago, the Kingdom of Makuria was a rich country, its power could compete with the Arab invaders, attacking from Egypt. The Letti Basin was an economic and cultural base for the capital of Makuria - Dongola.

"Hag Magid is especially promising for us - it is a huge elevation with an area of over a hectare, on the surface of which we found medieval columns, details of architecture and thousands of fragments of pottery" - said Dr. Bagińska.

The researcher suspects that under the sand are well-preserved remains of a church, monastery and other structures from before one thousand years. To confirm this, she plans to perform non-invasive, geophysical surveys, which will tell what hides under the surface without having to drive a shovel.

"Structures hiding beneath the sand are from the same period and belong to the same cultural circle as the basilica discovered decades ago by Prof. Kazimierz Michałowski in Faras on - paintings found then went to Khartoum and Warsaw, where they are on display in museums" - said Dr. Bagińska.

The researcher is cautious in her estimates whether the importance of discoveries at Hag Magid will match those in Faras, but preliminary survey is promising - she believes that it is possible to make spectacular discoveries in the form of interior decorated with paintings, stone architectural details and decorative floors.

"Importantly, in contrast to Egypt and other countries in the Middle East, where it is not possible to acquire even part of the monuments from excavations, the Sudanese authorities are open to this type of solution. This means that tangible results of excavations will not only increase enhance knowledge, but also museum collections. Even the monuments found on the surface of our site of interest have a large exhibition value" - noted Dr Bagińska. Currently, the researcher is looking for funds to finance the fieldwork and geophysical surveys in this year\'s archaeological season, which is planned for autumn.

Ceramic dishes resting on the surface of the hill at Hag Magid come from VII-XIII centuries. The hill has a height of approximately 6 meters; archaeologists believe that it formed as a result of hundreds of years of settlement - subsequent structures were erected in the same place. That created a huge hill consisting of relics of buildings, mud bricks, stone details and tons of pottery.

Scientists know that more than 1,000 years ago the Letti Basin looked very different than today - now sandy desert dominates. "During the heyday of the kingdom of Makuria, a canal ran near Hag Magid and watered the whole area. It is worth noting that vines were cultivated here on a large scale, and wine was produced, as we read in the reports of Arab travellers who ventured into this Christian kingdom" - said Dr. Bagińska.

Therefore, the goal of scientists will also be to study the historic climate and crops - until now archaeologists working in Sudan did not research this topic.

"We are also concerned that Hag Magid could be buried by shifting sand dunes - thus we would lose the opportunity of studying it for the next few decades" - concluded Dr. Bagińska.

By Szymon Zdziebłowski, PAP - Science and Scholarship in Poland