Scientists are studying the enigmatic Plain of Jars in Laos 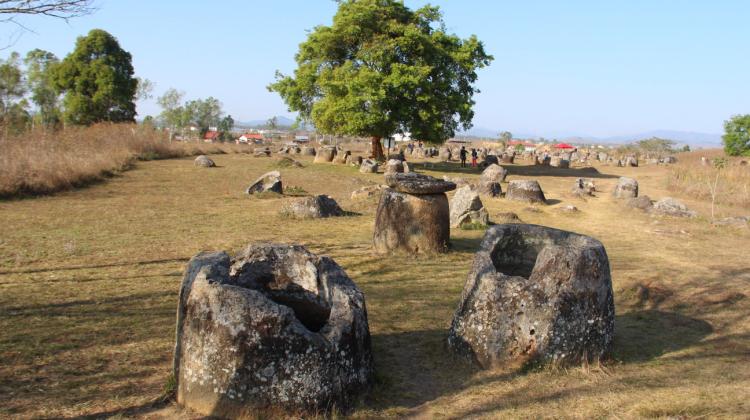 Gigantic stone jars are scattered in the central part of Laos. So far, archaeologists have been unable to determine who made them and for what purpose. The exact number of unusual objects is also unknown. International study coordinated by the Australian National University, with the participation of Poznan scientists and students, sheds new light on this issue.

Scientists have just completed the first season of a comprehensive research project, the fieldwork part of which took place in February.

"We have a number of goals in our research project. We want to determine who made the mysterious stone jars, which are scattered in the central part of Laos. It still remains a mystery to us. We do not know what people made them, where they came from, and where they lived. We have only a vague idea of the function of the jar sites" - explained Dr. Dougald O\'Reilly of the Australian National University, head of the project.

Until now it was assumed that the jar sites were made between the mid-I millennium BC and the year 500 AD. Most were made of sandstone - the raw material mined from local quarries. They are often accompanied by stone discs, which are sometimes referred to as jar lids.

For now, researchers have focused on Site 1 located on the low plain near Phonsavan in the province of Xieng Khouang, where probably the largest group of those specific sites is located. Most of the other clusters of jars are on higher ground - approx. 1200 - 1300 meters above the sea level.

The last major study of the Laos Jars was carried out in the 1930s by French geologist and amateur archaeologist Madeleine Colani. In later periods, only minor excavations were carried out, which contributed little to the knowledge of the mysterious jars. In the years 1963-1974 the US military heavily bombed the area during the Vietnam War. Millions of unexploded ordnance in the form of cluster bombs made the area very dangerous for the local population and tourists. Only at the beginning of this century some of the most well-known jar sites were demined, allowing archaeologists to begin extensive research.

"We hope that our research will help Laos in nominating the Plain of Jars to the UNESCO list of World Heritage Sites" - added Dr. O\'Reilly.

Preliminary findings show that the jars were associated with prehistoric burial practices. During recent research, archaeologists discovered primary, secondary and urn human burials in the vicinity of the jars. "Our research, despite its initial stage, revealed a broad spectrum of burial practices at Site 1, which is very interesting. Such variety of rituals in one culture is unusual. There may be several explanations for this phenomenon. We hope to find an explanation" - said Dr. O\'Reilly.

Some of the excavated areas were selected on the basis of GPR analysis. The scientists involved in the project use a wide range of research methods. They will perform DNA and isotope analysis of the bones of the deceased. A GIS (Geographic Information System) research system has been developed for the project by Kasper Hanus - a PhD student from the Institute of Prehistory, Adam Mickiewicz University in Poznań, who also took an active part in the field research.

"Our achievements include precise mapping of all the jars and accompanying objects at Site 1 - so far no one has undertaken this task. We now know that there were exactly 348 jars here" - Kasper Hanus told PAP.

GIS - database containing information not only about the location of jars, but also their sizes and raw materials from which they were made - will be coupled with a map prepared also by Kasper Hanus using images taken by a drone. Students of the Institute of Prehistory, Adam Mickiewicz University in Poznań also participated in this year\'s work.

"Some of the jars have impressive dimensions - the largest we measured this year had 2 meters in diameter and were more than 2 meters high!" - told PAP Karolina Joka, one of the students who participated in the research.

An integral part of the research project was training local archaeologists and archaeology students in the use of modern technologies in field work.

The work will continue next year - the entire project is planned for 5 years. The Australian National University research at the Plain of Jars, is conducted in cooperation with Monash University Australia and the Ministry of Information, Culture and Tourism of Laos. The project is funded by the Australian Research Council.