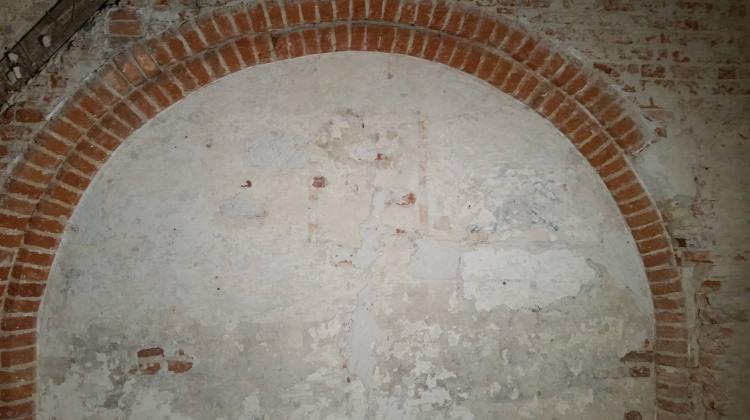 Relics of a medieval painting in the Pile Chamber. Photo: archive of the Gdańsk History Museum

During the architectural and conservation study in the basement of the historic city hall building in Gdańsk, researchers uncovered relics of a wall painting depicting the scene of the Crucifixion - reported the Gdańsk History Museum.

The discovery was made in the Pole Chamber, which in the Middle Ages served as a "tax office", where port fees collected (so-called pile fees, the name comes from pile moorings). Later, the place was transformed into the Excise Duty Chamber, where the tax on food called the excise duty was collected. These interiors are among the best preserved medieval secular spaces in Gdańsk.

The discovery was made after the removal of cement plaster made after the war from the walls. Underneath were preserved fragments of medieval painting depicting the Crucifixion. This is a surprising discovery, since the chamber had secular functions. Historians knew that the town hall once had a chapel, but were unable to determine its precise location until now. In 1427, under edict of Pope Martin V, Gdańsk City Council was granted permission to establish a chapel in the town hall. Until now, researchers assumed that the masses for councillors and their families were celebrated in the Great Hall of the Council. The new discovery, researchers believe, may indicate the ground floor, but nothing else indicates that the Pile Chamber had such purpose.

Now the painting will undergo conservation - in the first phase it will be secured and cleaned. Curators, which are responsible for the historic interior, hope that this will make the painting more visible.

Research in the Pile Chamber began in 2015. Researchers are looking for historic murals, as well as carry out architectural studies to determine the phases of the construction of the hall basement, reconstructions and changes in the layout of the interior. They were able to determine that the wooden ceiling of the chamber comes from the year 1378 or 1379, and more of its fragments have been preserved than previously thought. Curators are planning to open the interior for tourism in the future.