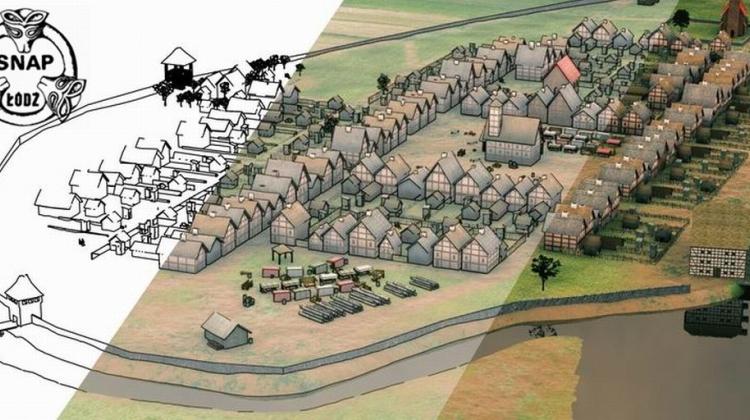 Scientists summarised one of the biggest archaeological projects in Poland to date, carried out using non-invasive methods. Using modern methods, without driving a shovel in the ground, they discovered medieval Nieszawa, rich fifteenth-century city that had existed for only a few decades.

The results of field studies and expert analyzes have been issued in the publication "In search of the lost city: 15 years of research of the medieval location of Nieszawa".

"Without precedent is the fact that the book is largely based on the results of non-invasive studies, which allowed to survey the urban structure and to confront it with documentation from earlier studies and historical sources" - explained Piotr Wroniecki, archaeologist, one of the editors of the volume.

Nieszawa was a trading city bustling with life, inhabited by several thousand people from different parts of the Crown of the Polish Kingdom and many European countries. It was densely developed, with a huge market, clear parcels with buildings, regular street layout. Within it were religious buildings, commercial, production and storage spaces - all the structures are well researched by archaeologists, despite the fact that the excavations were carried out on a very small scale. The town was protected by the nearby Dybów castle - located in today’s Toruń, often visited by Polish kings.

Nieszawa was deliberately founded opposite of Toruń - on the west side of the Vistula river, belonging to the Teutonic Order, to compete with Toruń politically and economically. The dynamic development of Nowa Nieszawa could not be stopped by political pressure or military incursions by the Teutonic Knights, but ultimately the city paid for its with destruction and translocation.

"Fortuitously, the relics of the city remained relatively unaffected over five and a half centuries, becoming a kind of time capsule, until we used a number of archaeological research methods, which enabled non-destructive survey of the remnants and the restoration of the former Nieszawa on the maps of medieval history" - added Wroniecki.

It is believed that the "lost" Nieszawa was founded in 1423 years by order of King Władyslaw Jagiełło. It was quickly granted city rights. Thanks to its favourable location on the Vistula River, at the border river crossing on an important trade route from Kujawy through the Teutonic state to the Baltic Sea, Nowa Nieszawa developed rapidly - urban development was wooden or half-timbered, but important representative or religious objects were built of bricks.

Due to its proximity to the border with the Teutonic Order, after only nearly 40 years the city was abandoned and relocated a few dozen kilometres further south. Development of Nieszawa was stopped by the invasion of the Teutonic Knights and the burghers of Toruń, who in 1431 plundered and destroyed the city and seized the castle. But already in 1436 under the Treaty of Brest Poles regained the estates on the west side of the river. In 1454 the political situation changed following the uprising of the Prussian bourgeoisie against the authorities of the Teutonic Knights. After submitting to the authority of the Polish king, burghers of Toruń, who consistently demanded the destruction Nieszawa, were promised by Casimir the destruction of the competitive centre in three years. The King played for time, but in autumn 1462 the destruction of Nowa Nieszawa become a reality. Nieszawa was reborn and survived to the present time approx. 30 km south-east of the place where it was originally located.

"Many years of archaeological research made it possible to prove that the effort put into the location of New Nieszawa was part of a complex of economic and political strategy against the Teutonic Order and its plans to dominate trade on the Vistula and the region. Although Nieszawa disappeared from the face of the earth, its presence in the vicinity of Toruń contributed to the eventual takeover of Toruń by the Polish Kingdom" - summed up Wroniecki.

Published monograph is a collective work including thematic studies by the group of researchers who studied the site over the past decade and a half. It presents not only the spectacular results of non-invasive studies (including aerial and magnetic surveys), but also the results of historical and geomorphological analyses (allowing to determine the then natural conditions). The text is accompanied by 3D digital artistic reconstruction of Nowa Nieszawa.

Editors of the volume are: Aleksander Andrzejewski and Piotr Wroniecki, whose texts open and close the publication.

The monograph has been issued jointly by Łódź branch of the Scientific Association of Polish Archaeologists and the Institute of Archaeology, University of Lodz. Its publication was possible with funding from the Ministry of Culture and National Heritage under the Cultural Heritage programme. Electronic version of the book will soon be available for download at www.staranieszawa.pl