What wells tell us about our ancestors 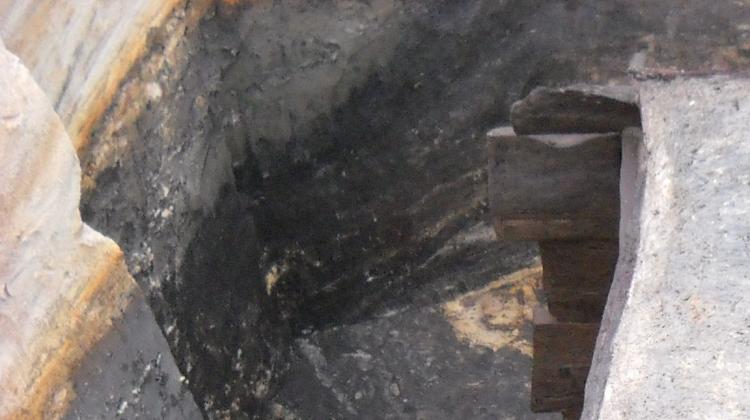 One of the wells studied in Kwiatków. Photo by E. Schellner

A real cluster of wells dating back approximately 1800 years has been discovered by archaeologists in Kwiatków near Koło in Wielkopolska. In a prehistoric settlement they counted exactly 101 wells. Such accumulation is unique in Central Europe.

"It is a real mystery" - told PAP Magdalena Piotrowska of the Institute of Prehistory, Adam Mickiewicz University in Poznań, who has received a grant from the National Science Centre for solving the riddle. "The settlement was very conveniently located near water sources, including the Warta flowing nearby" - she added. She said that in recent years the number of wells discovered at archaeological sites had greatly increased, which is associated with large-scale research and rescue operations. However, a paper ordering and updating knowledge about the wells has not yet been published. As part of the grant from the National Science Centre, the researcher will look at the problem in a comprehensive manner, but focusing mainly on the example of Kwiatków.

Kwiatków is located in the valley of Warta, in the Valley Kolska, through which, according to some researchers, could lead one of the variants of the "amber route". It was an alleged mercantile route connecting the Roman Empire with Barbaricum - as the Romans called the lands beyond their borders. Archaeologists were able to identify villagers; in taxonomic terms (based on specific products and burial customs) the community is defined as the Przeworsk culture. According to some researchers, their representatives should be identified with the Germans.

"Unprecedented number of dedicated items, which is a category of discoveries that are unique - in addition to numerous fragments of pottery - which include coins, tokens, fragments of exclusive terra sigillata pieces and numerous decorations in the form of clips, show that located in Kwiatków was a vast and rich settlement that functioned for several centuries" - said Dr. Piotrowska.

Archaeologists believe the wells to be very valuable sources of knowledge about ancient people. Preserved well linings will allow to obtain dates of felling trees, which in turn will allow to determine the period of functioning of the entire settlement. These analyses are yet ahead of researchers. "Due to the lack of similar sites in Poland we will need to confront it with the sources from the Central Barbaricum" - added Dr Piotrowska. The researcher will not limit her project to the analysis of wells and their interiors - to fully understand their functions she will try to reconstruct the functioning of the settlement and its character.

It is unclear for how long each of the wells had been in use. But scientists noted that the wells had been made using various methods; this could indicate different construction times, or different functions. There are more similar questions. In many wells archaeologists discovered millstones and animal remains.

"We believe that these practices could be associated with symbolic +closing+ of these facilities after their functioning had ceased. Further analysis of the items discovered in the wells may reveal more about the beliefs of villagers" - added the researcher.

In her opinion it is possible that some of the objects in Kwiatków identified as wells, in fact were not wells at all. "It seems that the geochemical analysis will help answer the question whether, in the case of objects from the site post in Kwiatków, water from wells was safe to drink, or used only for +industrial+ purposes" - she added. This is another clue scientists investigate. Preliminary results indicate that the wells were necessary for extensive manufacturing operations. Within the settlement, archaeologists found numerous items associated with weaving - as many as 160 spindle whorls, many weights and wooden tools resembling paddles - the latter category of objects is not common in Polish archaeology.

"The economic purpose of wells could, but did not have to be associated with weaving" - said Dr. Piotrowska with caution. She also drew attention to the fact that water could have special properties due to the presence of fossil forest below the settlement. This is another topic of ongoing expert analyses.

It is already known that some of the discovered wells were located near small, slightly recessed pole buildings, believed to be workshops, which may indicate their association with specialized production.

Dr. Piotrowska emphasised the excellent state of preservation of well linings which will allow to study the carpentry skills of the inhabitants of the settlement, analyse how the designs and preferences in the selection of raw materials. "Until now, no site had so many different design solutions as Kwiatków" - she noted.

Scientists plan to reconstruct the environment of the settlement in detail - they will also perform palynological analyses (of pollen), analyses of charcoal (to determine the species of trees). They will also look at the remains of seeds discovered in the wells. The age of wells will be determined by carbon isotope C14 dating and dendrochronological analysis. Archaeozoologists, in turn, will determine animal species based on bones.

The ancient settlement in Kwiatków was discovered in 1996. Excavations started in 2012 and continued for a few years, because the place was threatened by the planned expansion of the nearby opencast coal mine.