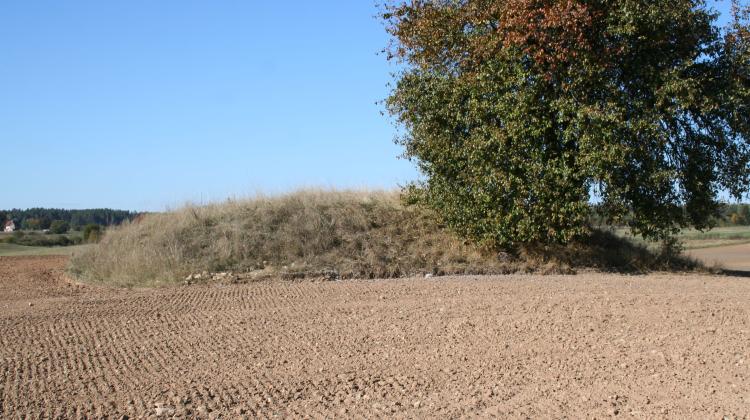 Six alleged burial barrows, as well as relics of two fortified settlements, embankments, ditches and other defence system elements of early medieval Jaćwież have been located in Ełk Lakeland by archaeologists from the State Archaeological Museum in Warsaw. The discovery was made using airborne laser scanning (ALS).

Scientists surveyed an area of 110 km square. They focused on 11 areas near the famous castles and fortified settlements located in poviats Ełk and Grajewo.

"We believe that around these centres there still are many unknown positions with their own landscape forms - relics of extensive early medieval defensive systems. North-eastern Poland is an area still poorly known by archaeologists. The reasons for this state of affairs include numerous wetlands and forest areas" - explained Cezary Sobczak from the Department of Archaeology of Balts, State Archaeological Museum in Warsaw, the project leader.

The study included the areas around settlements in Bajtkowo, Gorczyce, Rajgród, Rogale, Skomack Wielki, Skomętno Wielkie, Stare Juchy, Wierzbowo. Analysis of images created on the basis of laser scanning digital elevation models, provided many details of the construction of already known castle towns, and information on the conservation status of dozens of positions with their own landscape forms.

"However, the biggest surprise was the discovery, in the heavily agriculturally transformed area, of previously unknown large stone and earthen mounds, probably barrows from the early Iron Age or even older" - reported Sobczak.

Archaeologists verified the results of this study in the field, during the surface reconnaissance. At two sites they also carried out non-invasive geophysical surveys. However, according to project leader, to confirm the functions, determine the chronology and cultural affiliation of newly discovered sites excavations should be carried out - so far studies have not produced conclusive results.

Collected data have been added to the compendium prepared by the State Archaeological Museum in Warsaw, containing all available data on Jaćwież settlements and defence system as part of the Department of Archaeology of Balts project - Atlas of Jaćwież Fortified Settlements. The progress of work on the catalogue created under the supervision of Dr. Marcin Engel can be seen at http://www.grodziskajacwiezy.pl.

Scientists define Jaćwież as the easternmost tribal territory of early medieval Prussians. Its lands were located partially within todays Polish border, including the Suwalki region and near Augustów. The history of this region is well-researched archaeologically for the Roman period and the Migration Period. Only in recent years, after intensive research, scientists could shed new light on the history of this land in the Early Middle Ages (IX-XIII century). It was during this period when the mounted warriors of Jaćwież ravaged the settlements of their neighbours. The end of the tribe took place at the turn of the thirteenth and fourteenth centuries.

Laser scanning device using LiDAR and terrain and geophysical prospection were carried out in 2015. The project was financed with the Minister of Culture and National Heritage grant and funding from the Mazowieckie Province, under Priority 5 "Protection of archaeological sites" - non-invasive reconnaissance of Jaćwież fortified settlements of Elk Lakeland.