Monuments from the Fields of Grunwald after conservation; the public will see them in May 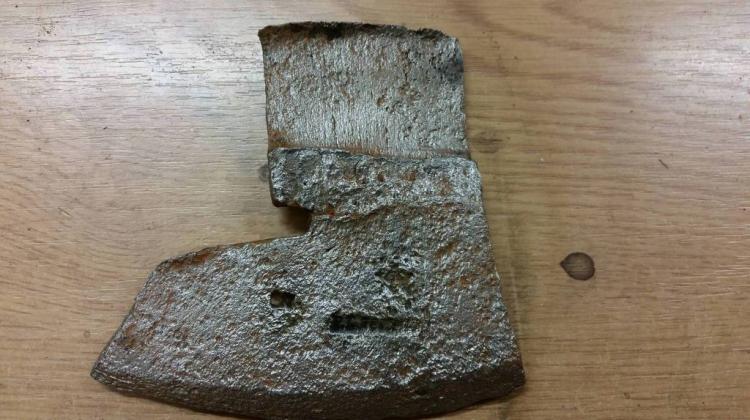 In the picture - one of the axes after conservation. Source: Museum of the Battle of Grunwald in Stębark.

Conservation work has been completed on 100 most interesting objects acquired over the last two years in the Fields of Grunwald, including arrowheads and bolts and parts of axes. The public will see them in the Museum of the Battle of Grunwald in Stębark in May.

Dr. Piotr A. Nowakowski, head of archaeological and historical department of the museum in Stębark told PAP that the conservation project included 100 most interesting objects acquired during archaeological excavations in the previous year and in 2014.

"Among them, first of all we should mention those that are without a doubt associated with the Battle of Grunwald: arrowheads and bolts, pieces of blades, hatchets and axe irons, spurs and their fragments, parts of iron glove. In addition, conservation has been performed on almost all numismatics - those coming from the Middle Ages, older ones from the Roman period, and contemporary until the time of World War II" - he said.

Conservation work was carried out by Mariusz M. Richter from the Institute of Archaeology of the University of Lodz. "The purpose of these procedures was to stop the process of destruction that threatened the objects and remove of traces of existing damage. Iron objects have been subjected to a bath in a solution of acetic acid and tannic acid, and then coated with a special preservative preparation. Copper objects underwent electrolysis, bath in a solution of benzotriazole in ethanol and coating in preservative preparation, and silver items only a bath in acetic acid. Of course, during the subsequent stages the objects were also treated mechanically as required" - said Dr. Nowakowski.

He added that all these objects were valuable and interesting. "Of course, due to the profile of the Museum, we are particularly delighted to acquire military equipment from the Battle of Grunwald. We can say that as a result of last year\'s research we recorded more than a hundred percent increase in the base of archaeological sources in our collections. These are small objects, but we must remember that bigger and more valuable items were largely collected from the battlefield after the battle. But we still hope to find also such items in successive seasons of research" - he emphasised.

He noted that museum workers were also happy to find evidence of the Roman Empire trade relations with the residents of the surrounding areas, such as Roman coins, and to improve the knowledge of fights in the Fields of Grunwald during the First and Second World War thanks to military objects dating from that period.

Museum of the Battle of Grunwald plans the presentation of preserved monuments at this year\'s Night of Museums – 16/17 May.

Since 2014, archaeological research is carried out in the Fields of Grunwald with the participation of scientists, archaeologists - employees Museum of the Battle of Grunwald in Stębark, as well as treasure hunters from Denmark, Norway, the UK and Poland. Scientists want the location of the main clash of Teutonic forces with the Polish-Lithuanian army.