Treasures on the ring road 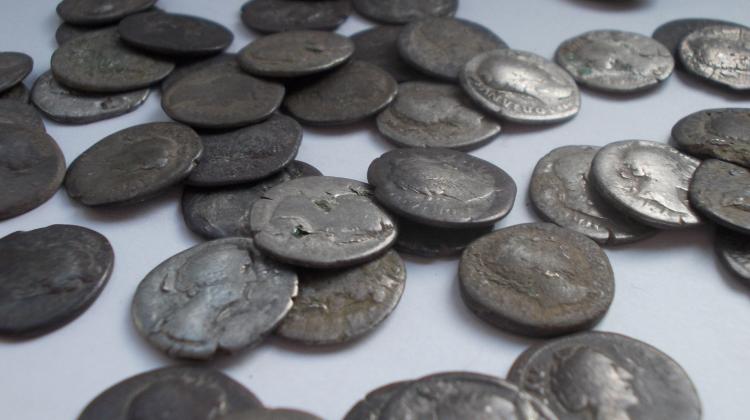 Archaeologists summarized 6 months of archaeological studies preceding the construction of a bypass around Ostrów Wielkopolski. The most interesting discoveries include treasure, which consists of dozens of Roman coins, ornaments and pieces of silver.

The excavations, headed by Leszek Ziąbka, were completed in November. The study focused around the village Wtórek in the district Ostrów. Archaeologists discovered numerous traces of ancient human activity - mainly objects associated with prehistoric production and storage. There are also relics of residential structures. Archaeologists identify findings with communities of the Lusatian (in this case from the period 1000-800 BC) and Przeworsk culture until the period of migration of peoples and the early Middle Ages. The study was financed by the General Directorate for National Roads and Motorways.

"The acquired data will allow to better understand the settlement changes occurring in the area" - argue archaeologists.

A curiosity the discoverers call "sensational" are treasures discovered in the close proximity to each other. The first treasure is a deposit of coins and ornaments made of silver, glass, and possibly amber. In addition to nearly forty Roman denarii from the first and second century and several beads, the treasure consists of fragments of silver clasps, one of which was probably made in the fifth century.

"The treasure was stored in a container made of organic materials, which was completely degraded" - researchers explained. According to Sławomir Miłek, one of the archaeologists involved in the dig, the specific traces on coins indicate that they were in the fire for some time. In his opinion, this fire in the settlement prevented the recovery of valuables by the owner. The dramatic event could have taken place in the mid-fifth century. Many treasures discovered in the area come from the same period. The hypothesis of the late hiding of the treasure is indirectly confirmed by the condition of the coins, heavily worn after several hundred years in circulation - argue the archaeologists.

Right next described the deposit, researchers found fragments of molten silver, remnants of melted raw silver. Lumps of silver were discovered together with fragments of pottery from the early Middle Ages, the XI-XII centuries. According to archaeologist Dariusz Wyczółkowski, the then inhabitants of the area could have recovered some of the denarii from the treasure and then melt them. The mystery will be explained after physical metallurgy tests, which archaeologists intend to carry out.

Another treasure, discovered about 30 meters from the previous one, consists of 67 Roman denarii. Among them are issues of emperors from the first to the second century, from Vespasian to Commodus. This treasure was also deposited in an organic container, no traces of which survived. According to Leszek Ziąbka, later part of the treasure was scattered as a result of plowing, but intensive surface work carried out by archaeologists allowed for its recovery. As in the case of the first treasure, this one was probably deposited in the ground at the same time, in the mid-fifth century. This dating corresponds to the active time of the settlement - its age was determined on the basis of the discovered pieces of ceramic vessels.

A few hundred meters away, at another settlement from the early Middle Ages, a different team of archaeologists discovered a treasure of raw silver, containing about 1 kg of pure metal.

All the treasures uncovered by archaeologists near the village Wtórek date back to the Migration Period, which is still very enigmatic to historians and archaeologists. This is due to the small amount of existing information available to researchers, and each discovery associated with this period may shed new light on its perception. There are strong indications that due to large population movements in the fourth-seventh century in Europe, the current Polish territory was temporarily abandoned. The void was filled by the Slavs who came from the east.