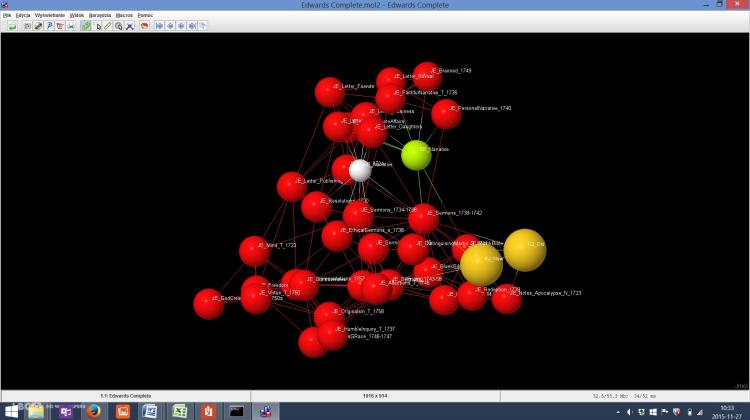 By using a special computer application, you can analyse literary style, and even the authorship of works. The stylometry method is used, among others, by researchers from the Jagiellonian University, who, together with Yale University, study the American sermons from the eighteenth century to compare them with sermons of today\'s preachers.

Researchers from Kraków: Dr. Michał Choiński and Dr. Jan Rybicki, both from the Institute of English Studies at the Jagiellonian University, specialize in stylometry, which is an innovative stylistic analysis of literary texts by using computer-based methods. They use a tool created by another outstanding stylometry expert from Kraków, Dr. Maciej Eder from the Institute of Polish Language PAS.

"Stylometry is like looking for and testing fingerprints. The basic premise of our study is that each of us writes in an absolutely individual style. This individuality is based on the words that the author uses most frequently. If we can mathematically calculate how often certain words appear certain combinations, we can determine who wrote the studied text" - Dr. Choiński explained in an interview with PAP.

Computer program "Stylo" used by the two researchers allows, for example, to count the most frequently occurring words, verbal relationships and patterns. Stylometry methods are widely used in police tests – allowing, for example, to determine based on style, whether two letters have been written by the same or a different persons. Philologists also more and more often use stylometry to confirm or disprove authorship of literary texts.

In their previous research project, Eder and Rybicki used stylometry to examined "To Kill a Mockingbird" by Harper Lee. This American author, after more than half a century or literary silence, recently published her second novel, "Go Set a Watchman". In fact, this "second" novel turned out to be a very early draft of the later bestseller.

The book was coldly received by American critics; some of the disappointed reviewers even doubted Harper Lee’s authorship of the book. Researchers from Kraków prepared an expert opinion that conclusively confirmed the Harper Lee’s authorship of both novels. The mystery, however, remains the extent of contribution of editor Tay Hohoff to the success of "To Kill a Mockingbird". Hohoff dealt with preparation of the later bestseller for printing.

That team of philologists from the Jagiellonian University is currently conducting stylometry studies on another subject: "The language of the eighteenth-century American colonial sermons". As part of the project want to create a corpus (database of texts) of American eighteenth century preachers and examine their styles, techniques of persuasion and authorship signals. The three-year study is carried out with the National Science Centre research grant "Opus".

According to Choiński, researchers will soon reach the halfway point of the project, in which they cooperate with the Jonathan Edwards Center at Yale University.

The main result of the study is to create a corpus of hundreds of sermons from the eighteenth century in the English language. After the project is completed, the corpus will be made available to researchers at Yale University, as well as other interested persons.

Researchers from Kraków explain that in colonial times in North America preachers preached to the crowds of even 12-14 thousand people. It was an interesting sociological and linguistic phenomenon, an important means of transferring information. It is known that the audience would sometimes react hysterically when the preacher was drawing images of hell or the apocalypse before their eyes.

"The use of stylometry gives us greater insight into the functioning of religion in American culture and development of the spoken word culture. With this statistical method, we can examine to what extent preachers - once and today - use biblical texts, and compare their speeches with the text of the Old and New Testaments. We can also learn how language patterns of the eighteenth century have survived in the language of today\'s +televangelists+ like Billy Graham, extremely popular in the US" - noted Choiński.

He believes that dealing with stylometry in literature never gets boring. "It\'s like playing detective, it is captivating and intriguing" - said English philologist from the Jagiellonian University.

Kraków scientists’ stylometry studies of "To Kill a Mockingbird" and the contemporary American prose caught the attention of the American press. An article about it has been published, among others, by the "Wall Street Journal".