Launch of the world's largest study of Egyptian mummies 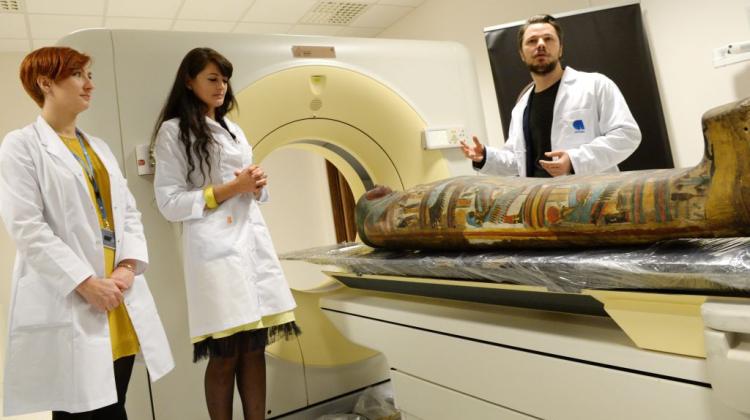 Marzena Ożarek-Szilke (L), Kamila Braulińska (2L) and Wojciech Ejsmond (R) during a press conference on the Warsaw Mummy Project in Otwock. In the project, researchers will study more than 40 ancient mummies of humans and animals. The study will provide a chance of finding traces of diseases occurring in antiquity. Photo: PAP/Jacek Turczyk 15.12.2015

Researchers will study more than 40 ancient human and animal mummies as part of the Warsaw Mummy Project, which was launched in Otwock. The study will give a chance to find traces of diseases occurring in antiquity.

The authors of the project are Polish archaeologists and bioarchaeologists, PhD students at the University of Warsaw: Wojciech Ejsmond, Kamils Braulińska and Marzena Ożarek-Szilke. The project is carried out in close cooperation with the National Museum in Warsaw, in the care of which the mummies are.

The Warsaw Mummy Project is the world’s largest interdisciplinary academic initiative devoted to the study of ancient mummies.

Scientists will first check whether the mummies are authentic and what they contain. "Especially in the case of mummified animals we know that bundles often contain only parts of animals - such mummies were mass produced and sold to pilgrims as votive offerings for the gods in the temples" - told PAP Marzena Ożarek-Szilke.

The study will also answer questions about the species, sex and age of the mummies, but above all give a chance to find traces of diseases occurring in antiquity, including bone diseases, metabolic disorders, infectious, vascular, parasitic diseases, and in particular cancer.

The first stage began on Tuesday (15th December) in the International Cancer Centre Affidea in Otwock, under the supervision of oncologists and radiologists. Tests using computed tomography (CT) and state of the art digital camera for X-ray examinations continued until Wednesday.

After that, the mummies will return to the warehouses of the National Museum, where further testing will continue until 2018, and then will be on display at a currently rearranged exhibition in the Ancient Art Gallery.

"So far only few interdisciplinary research projects mummies have been performed, in the UK, the United States and Canada, and in 2001 researchers carried out a series of tests on Egyptian mummy in Kraków - reminded Ożarek-Szilke. - Our project also entails going beyond the methods known and used by other teams, we also want to develop new techniques and medical analyses, so far not used for testing mummies".

She pointed out that modern science allows to study the ancient Egyptians not only to satisfy curiosity, explain the mysteries of the past, but also for the tangible benefits that come from research on the diseases plaguing us today.

The second stage of the Warsaw Mummy Project will consist in collecting samples from mummies - however, as reserve investigators - without damaging the exhibits, using laparoscopy. This will allow to conduct accurate laboratory analyses, including genetic studies using DNA testing.

"We are honored that we will have contributed to this fascinating project. Acquiring knowledge about the types tumours found in ancient times, organs which they attacked and stages of disease development can significantly contribute to the improvement of present methods of prevention and combating cancer" - said Andrzej Radkowski , medical director at Affidea Poland, the exclusive medical partner of the first stage of research in the Warsaw Mummy Project.

The Polish project also involves the Italian Carabinieri. "Their contribution will be especially valuable. The Italians have extensive experience in dactyloscopy and traseology of mummified remains" - Ożarek-Szilke told PAP. She added that thanks to the fingerprint analysis the occupation of the deceased can be determined, whether they worked physically, whether they were left- or right-handed. It will also be possible to determine the origin of the dead - whether they were Nubians, Egyptians, and perhaps the Hittites.

Egyptian mummies have been subjected to numerous tomographic tests since the 1970s. Until now, about 100 exhibits of this type have been examined. It is a very small part of all the mummies found in the world\'s museums. "But they have never been tested as thoroughly, in such a comprehensive manner and within such a complex, interdisciplinary project, as the one that our team begins" - believes Ożarek-Szilke.

Dorota Ignatowicz-Woźniakowska Chief Conservator at the National Museum in Warsaw said that the reorganized museum\'s laboratory intends to be actively involved in the second stage of the study. The museum’s potential has been strengthened through cooperation with one of the world\'s most advanced research institutions - interdisciplinary Biological and Chemical Research Centre of the University of Warsaw. "We are also open to unconventional scientific initiatives and support them. And the Warsaw Mummy Project is such an initiative"- added Ignatowicz-Woźniakowska.

The progress of scientists can be followed at: http://warsawmummyproject.com/. "We will also promote Poland and present the results in numerous scientific publications and at conferences abroad" - announced Braulińska and Wojciech Ejsmond.