Microstories from before 4000 years 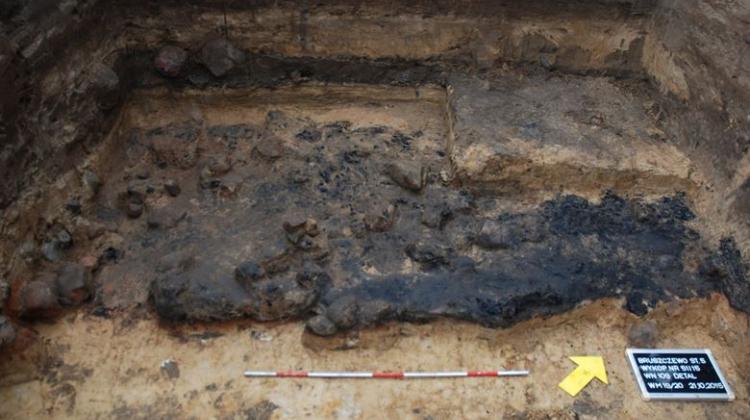 Recent studies of the fortified settlement from the Bronze Age in Bruszczewo (Wielkopolska) will allow a very detailed insight into the daily life of its inhabitants.

All because of numerous organic samples collected for C14 - radioactive carbon dating. This is the most common way to determine the age of finds discovered by archaeologists. However, the older the surveyed position, the less accurate are the estimated dates - with time, the possibility of precisely estimating the age is reduced.

"We will use Bayesian statistics, which takes into account a number of variables relating to time. We will obtain the full image and very detailed dating of each part of the settlement after coupling data flowing from the analysis of stratigraphy, context, typology of findings and C14 dates" - explained Prof. Janusz Czebreszuk, head of research in Bruszczewo for the Institute of Prehistory, Adam Mickiewicz University in Poznań.

Today archaeologists know that fortified settlement was founded by representatives of the Unetice culture community shortly after 2000 BC and functioned for about 350-400 years. Bayesian statistics will allow to look at the microstories inside the settlement, not just chronological framework and determination that the settlement existed "from / to". Until now, scientists have obtained approximately 100 C14 dating results, but thanks to the ongoing Beethoven program implemented by the Institute of Prehistory, Adam Mickiewicz University in Poznań together with German partners, they will have at least 100 more, which will be a good complement.

Excavations in Bruszczewie started in the 1960s, when archaeologists from the Archaeological Museum in Poznan worked in the area. They entered the interdisciplinary and international stage in the late 1990s, when a wide-range research project of IP Adam Mickiewicz University and the University of Kiel began.

"What we excavated is important for the analysis of the beginnings of the Bronze Age in Europe" - argues Prof. Czebreszuk.

Oval settlement occupied an area of 1.5 hectares and measured approx. 120 m in diameter. It had at most 100 residents. It was protected by a deep moat and at least two rows of wooden palisades. Fortifications were the objectives of this year\'s excavation.

"We found scorch marks that clearly indicate that the fortifications had been destroyed by fire several times during the existence of the settlement. At this point we can not say whether the fire contributed to the abandonment of the settlement" - said Prof. Czebreszuk. There were also numerous traces of repairs and alterations over the centuries. In addition, environmental analysis made in previous years clearly showed that the region around Bruszczewo around 1500 BC had been heavily exploited in ecological terms. According to the researchers, the end of the settlement could be associated with a local environmental disaster. Additional clue is the discovery of dozens of flint arrowheads in various places in the settlement - more than in all other Unetice culture settlements combined. Perhaps an ecological disaster coincided with an invasion - the scientists suggest.

Among the latest findings of archaeologists are also sensational discoveries concerning bronze workshop existing within the settlement. The analysis of all objects made of metal allows to say that metallurgists worked here continuously for hundreds of years. "It is hard to determine whether it was a family trade, or a master trained apprentices in this trade, but a continuous, passed down from generation to generation knowledge if technology is certain - finished products were not arriving here from the outside" - explained the archaeologist. Also new is the discovery of traces of gold processing on stone tools.

Bruszczewo has been entered in the register of monuments by the Wielkopolska conservator. However, due to intensive agricultural work, the prehistoric site is threatened with destruction. To date, archaeological have examined approx. 20 percent of the settlement surface. Fortunately, it is partly also in peat, which effectively preserves monuments and structures, as is the case with the famous Lusatian Biskupin.

"Maintaining water ratios within the settlement is crucial. Unfortunately, the area is constantly drained and adapted to more intensive cultivation, which could jeopardize maintaining the monuments. It is important that the relics of the settlement survive for future generations of researchers" - believes Prof. Czebreszuk, who has the support if the local government in this respect.