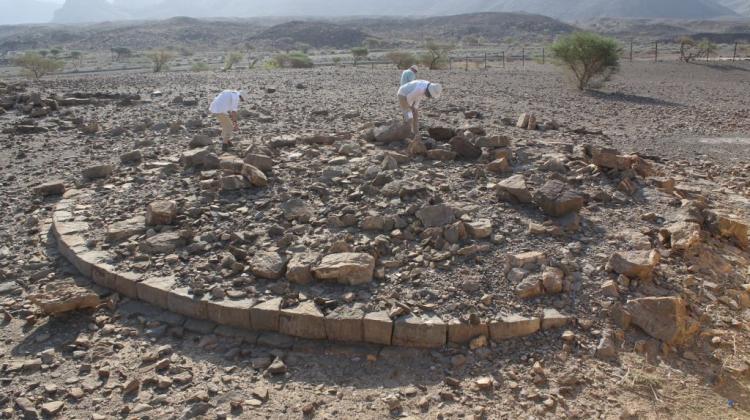 Warsaw archaeologists returned from reconnaissance in the north-west of Oman on the Arabian Peninsula. It is the beginning of a four-year research program in the northwestern region of the country.

This year, the mission conducted preliminary surface surveys at four settlement sites and five tomb sites in the mountain valley near the villages Bilt and Al-Ayn. The team of archaeologists led by Prof. Piotr Bieliński from the Institute of Archaeology of the University of Warsaw found two previously unknown settlement sites.

In the coming years, archaeologists plan to study the necropolis from the Hafit culture period (early third millennium BC) with stone tower tombs. Another object of research will be a big structure from the first millennium BC, the function of which has not yet been determined. The work will also be carried out at the nearby prehistoric site. "This season’s finds hint at it being a pre-agricultural Neolithic site, which is a very interesting phenomenon in the Near East" - said Prof. Bieliński.

The micro-region of Qumayrah, which is the subject of research, includes several mountain valleys. Until now, it has not been archaeologically studied in a comprehensive manner. According to Prof. Piotr Bieliński, the area has attracted interest of scientists because of the resources of copper exploited for thousands of years - the most important natural wealth of Oman. Trade route ran through the mountain valleys in ancient and medieval times, connecting the interior with Persian Gulf and the Gulf of Oman. The inhabitants used these routes to transport both melted copper blocks, as well as finished products such as weapons, utensils and ornaments to the coast of Oman. They were exported mainly to Mesopotamia, where they are found, among others, in the tombs of Sumerian kings (III millennium BC).

The research project in the Qumayrah region is a cooperation between the Department of Excavations and Archaeological Studies, Ministry of Heritage and Culture, Sultanate of Oman and the Polish Centre of Mediterranean Archaeology, University of Warsaw. This year\'s reconnaissance precedes fieldwork scheduled for the years 2016-2018.