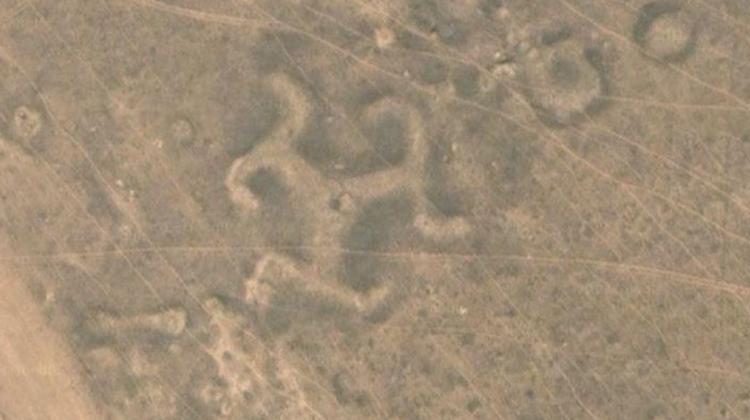 Dozens of mysterious geoglyphs, monumental signs visible from above, which consist mainly of earth mounds, have been discovered in Kazakhstan by an amateur archaeologist. Archaeologists from the Institute of Prehistory, Adam Mickiewicz University in Poznań joined an international team of researchers trying to understand their significance.

The press hailed the find the "Nazca Lines of Kazakhstan" because Nazca plateau in Peru is the location of the most well known ancient landscape forms, clearly visible from above - the latter depict geometric figures, plants and animals. The renowned newspaper "New York Times"reported a few days ago on The study geoglyphs in Kazakhstan.

Poles joined the project at the invitation Giedre Motuzaite Matuzeviciute of Vilnius University and Andrei Logvin and Irina Szevnin of the Kazakh University of Kostanay. The team of students under the supervision of Kasper Hanus, PhD student at the Institute of Prehistory, Adam Mickiewicz University in Poznań, analyses the available data and ranks them according to the GIS (Geographic Information System) methodology used in archaeology.

Discoverer of the signs - Dmitry Dey, Kazakh economist and archaeology enthusiast, made the discovery by looking at publicly available maps on Google Earth. Poznań archaeologists, with the help of Wojciech Ostrowski from Warsaw University of Technology, in addition to the maps also analyse images of the area taken by satellite Corona in the 1960s and 1970s and numerical models of land acquired by the United States Geological Survey. All this to determine the full picture and context of the creation of the signs. On the other hand, scientists from Kazakhstan and Lithuania are researching the cultural and historical background of discovered geoglyphs - they bear the greatest burden of work.

"It is believed that geoglyphs are visible only from the air. We set a working hypothesis, however, that in the case of symbols discovered in Kazakhstan it could be completely different" - explained Kasper Hanus. According to the archaeologist, the discovered geoglyphs were "property signs", commissioned by the local rulers. Where does this idea come from?

"We noticed that many of the symbols in Kazakhstan visible on satellite photos - among them a swastika, distinctive, complex geometric shapes made up of crosses, circles, in theirs symbolism are consistent with tamgas, clan signs used by nomadic steppe people" - said Hanus.

Polish team will use advanced computer tools to analyse geoglyphs in terms of their visibility from the steppe. According to Hanus, it can not be ruled out that geoglyphs were created in particularly exposed places - so that they would be clearly visible to the local communities and informed them which tribe owned the land.

With limited scope excavations carried out within a few geoglyphs scientists dated them to the late Bronze Age or early Iron Age, ca. 800 BC. Archaeologists draw attention to the scale of the project - some of the patterns measure several hundred meters in length - their construction must have involved dozens, if not hundreds of people and many hours of hard work, planned in detail. Meanwhile, the builders were nomadic, moving with their herds.

"The coming weeks will involve intensive deskwork, but next year we are planning to join the team leading the excavations within the geoglyphs. However, our group will not carry out excavations, only use the capabilities of modern archaeological prospection tools, including drones" - said Hanus.