New information about the history of the Cieszyn rotunda 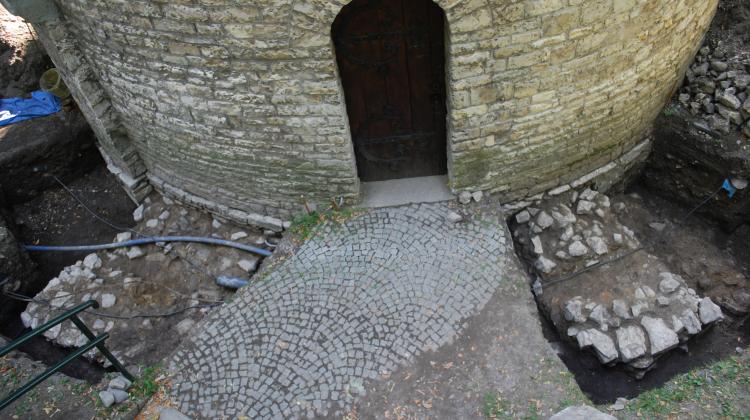 Two buttresses at the door of the rotunda. Photo by Zofia Jagosz-Zarzycka

Many people look at it every day - Romanesque rotunda on Castle Hill in Cieszyn appears on a 20 zloty bill. However, it is still full of mysteries for scientists. Another season of excavations brought new and surprising information.

"The most interesting discovery are monumental buttresses, adjacent to the foundation of the temple" - explained Zofia Jagosz-Zarzycka of the Museum of Cieszyn Silesia, who leads the excavations together with Dr. Teresa Rodzinska-Chorąży of the Art History Institute of the Jagiellonian University. There are six huge structures, two of them at the front entrance to the rotunda, and two at the contact of the nave and apse (south and north). In recent weeks two more were discovered. Although they are just half a meter under the ground, until now scientists were completely unaware of their existence.

"In one of the preserved drawings depicting the Castle Hill appear two walls adjacent to the wall of the chapel on the south side that we can identify with the uncovered relics of buttresses" - commented Jagosz-Zarzycka. The illustration shows that originally the buttresses were several meters in high. Although buttresses were adjacent to the foundation of the rotunda, we know that were built later than the original structure, probably in the fourteenth century. According to archaeologists, their function would be strengthening the wall, or "Gothic-style modernization" - adapting the building to the new architectural trends. The above-ground parts of buttresses were probably removed in the 1st half of the nineteenth century, when the rotunda was transformed into a neoclassical building designed by Viennese architect Josef Kornhäusel. The deeper parts of the walls were dismantled during the rotunda restoration and replacement of the external stone in the 1940s and the 1950s. The presence of buttresses, however, was not recorded at that time.

Current excavations also confirmed earlier suspicions of scientists on the age of the structure. For a long time it was believed that the rotunda was built in the 1st half of the eleventh century. According to Dr. Teresa Rodzińska-Chorąży, it should be connected with the period of existence of castellany on Castle Hill in mid-twelfth century, or with the first decades of the existence of the Duchy of Cieszyn.

During excavations, archaeologists discovered numerous fragments of pottery from the Middle Ages, communities, from the Púchov culture identified with the Celts and the Bronze Age, which clearly indicates that the Castle Hill had attracted settlers for millennia.

This year\'s excavations ended in September. They will be continued next year. Scientists are also planning to prepare a virtual three-dimensional reconstruction of the rotunda with the newly discovered buttresses.