Inauguration of the National Synchrotron Radiation Centre Solaris in Kraków 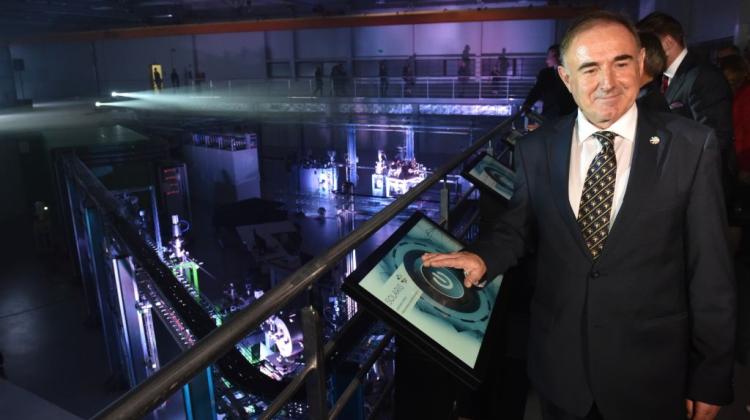 National Synchrotron Radiation Centre SOLARIS in Kraków inaugurated its activities on Monday last week. "It is +a little sun on earth+ that will allow to perform research in many fields" - said the director of the centre Prof. Marek Stankiewicz.

He also emphasised that Solaris is the largest research infrastructure built in Poland since 1974, when the reactor Maria was built in Świerk near Warsaw.

The cost of five-year construction of Solaris (the building, synchrotron and two research lines) amounted to approx. 200 million zlotys. The funds came from the European Union.

The heart of the Centre opened on Monday last week is a synchrotron with a circumference of 96 meters, covered with nearly 180 concrete panels - each weighing three to five tons. The plates are the radiological shield against radiation and allow users safe operation.

Prof. Stankiewicz explained that synchrotron can generate light millions of times more powerful than sunlight. "Synchrotron is +a little sun on earth+ that will allow to perform research in many fields. We can use it to analyse materials, study their surfaces and structure, look into their interiors, all this with atomic resolution. The spectrum of possible research is enormous - physics, chemistry, biology, archaeology, art history, medicine" - said Prof. Stankiewicz.

"Despite the synchrotron’s large size, we can also think of it as a small torch, microscope, but also a scalpel, with which we can cut the atomic, molecular bonds, and stimulate reactions taking place in matter" - said the director of Solaris.

According to Deputy Minister of Science and Higher Education Prof. Marek Ratajczak, the construction of Solaris is another great success of Polish education and science in recent years. "It is worth remembering that over the last eight years we have spent more than 30 billion zlotys on investments in science and higher education, approx. 3 thousand projects, and on the infrastructure projects alone - over 15 billion zlotys. Polish science and higher education are changing" - said the professor.

Solaris Centre is located in the Third Campus of the Jagiellonian University. According to Deputy Minister, modern complex at the oldest university in Poland is symbolic, it is a meeting of modernity and tradition. Prof. Ratajczak also expressed the belief that the synchrotron will not only strengthen the position of Polish science on the scientific map of the world, but also be of crucial importance for the social, economic life.

Solaris was built in cooperation with scientists from the Swedish MAX IV Laboratory at Lund University. Now the Solaris team has approx. 40 members. CTO of the Solaris Project Prof. Carlo Bocchetta said that people - next to modern technology - are the most valuable asset of Solaris. "I am convinced that we will make great science here" - said technical director.

Solaris is the only such centre in Central and Eastern Europe, and researchers from neighbouring countries are already interested in the cooperation with it. Until now, they had to carry out research using synchrotron in Western Europe, the USA and the Far East.

Currently the centre in Kraków has two synchrotron radiation outputs (lines). Depending on interest and available funds, more of these research lines will be developed, ultimately at least a dozen.

Synchrotron will operate around the clock. The machine will enable the research of several groups at the same time. The first studies will concern the properties of radiation samples themselves. Further research will be conducted in the field of material science, biochemistry and pharmacology. Subsequent research projects will be approved by the program committee.

There are several devices of this kind in the world, most of them in Japan and the US. In Western Europe there are is approx. 10 synchrotrons, the closest to Poland in Germany and Sweden. Until now, our scientists have been conducting research in collaboration with colleagues from foreign centres.