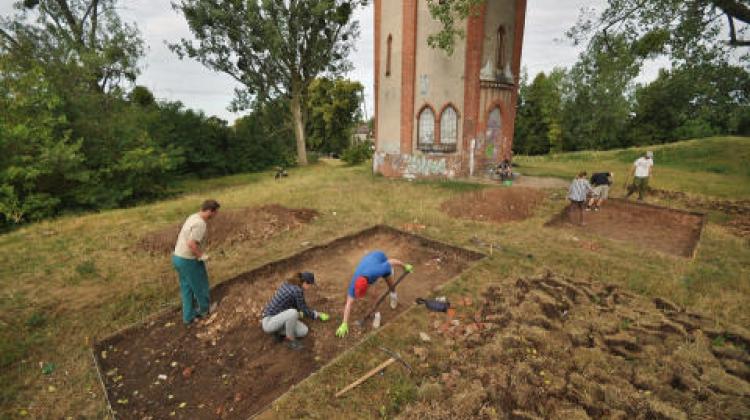 General view of the excavations explored in the eastern part of the convent house. Photo: B. Wasik

Only fragments of ward walls and pillar of a medieval toilet arcade of the castle of the Teutonic Knights in Kowalewo Pomorskie (Kuyavian-Pomeranian province) have been preserved to this day. Excavations conducted by archaeologists from Toruń shed new light on the history of the fortress.

Scientists from the Institute of Archaeology of the Nicolaus Copernicus University in Toruń came Kowalewo Pomorskie in 2013. It was then that the first extensive archaeological and architectural research project was carried out.

"This year\'s work focused on identifying the eastern part of the high castle and - for the first time on a larger scale - one of the three wards" - explained Dr. Marcin Wiewióra, leader of the expedition of the Department of Archaeology of Architecture, Nicolaus Copernicus University.

The castle in Kowalewo Pomorskie is one of those Teutonic fortress in Chełmno land that puzzle researchers. The only image of the castle dates back to the 17th century, and is unclear.

"Historical information about this stronghold is equally modest. Teutonic Knights commandry was built here between 1272 and 1275. Historians assumed that the start of construction of the castle took place shortly thereafter. We already know through our excavations that this is not true" - Dr. Wiewióra told PAP. Archaeologists changed the views also after this year\'s discovery in the form of a profiled brick with preserved, legible engraved drawing of the starry vault. According to the researchers, this type of architectural solution appeared in Prussia only in the first quarter of the 14th century. After three years of field work, archaeologists are also slowly reconstructing the plan of the high castle.

The castle consisted of two wards; just north of them was the convent house, a high castle surrounded by a strip of land between the castle and the outer wall. It was connected with the third ward, located west of the castle. The whole complex was surrounded by a moat, and from the north by the lake that does not exist today. In the western ward the archaeologists have found probable remains of wattle and daub buildings and traces of brick buildings.

"Thanks to the work of the research team we were able to determine the building techniques and understand the ideas of medieval engineering. It turned out that the castle was built on unstable, sandy soil. Due to that, the builders were forced to use wide foundation ditches under the walls and an additionally level the area with plenty of soil, obtained probably from the ditches" - said the researcher.

History has not been kind to the keep. Already the wars of Wladyslaw the Elbow-high with the Teutonic Knights, the castle in Kowalewo was besieged and damaged. Similarly a few hundred years later, during the Thirty Years War, when Prussian troops captured the castle. Historical sources leave no doubt that already in the seventeenth century the stronghold was in poor repair. The castle also suffered during the war against the Swedes. In the eighteenth century it was used by governors, but it was so severely damaged that in the end it was abandoned. Total demolition of the castle was carried out throughout the nineteenth century.

This year the work was completed in July. The researchers hope that the excavations will continue next year. Then they focus on surveying the wards. The activities are part of a wider project whose objective is to attempt to answer the basic questions related to the origins of the Teutonic brick defence architecture in Chełmno land.