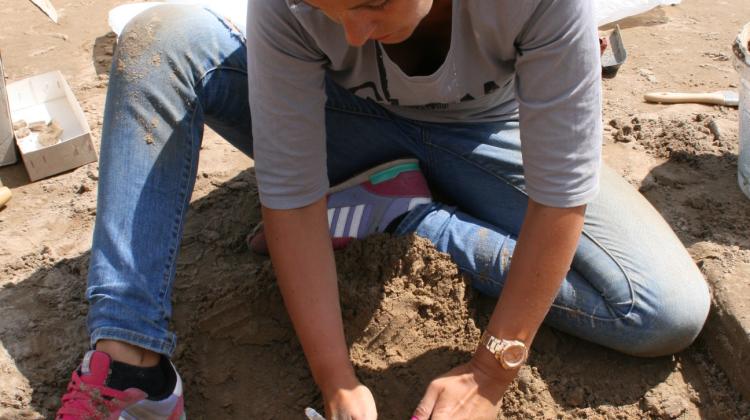 Study of the grave Photo by Karolina Rataj

Spearheads stuck into the bottom of burial chambers containing urns with the remains of the dead have been discovered by archaeologists during excavations just ended in Nowa Żelazna (Mazowieckie).

The cemetery is known to scientists only since 1999, when it was pointed to them by a local resident who stumbled upon an accumulation of objects made of iron and bronze. It quickly became clear that the information was very valuable. The researchers found that the objects indicated the remains of a 2 thousand years old settlement and burial ground.

"Unfortunately we were not the first ones there. During our research we found many robbery pits made by detectorists"- told PAP Małgorzata Cieślak-Kopyt from the Jacek Malczewski Museum in Radom, who has been the head of excavations in Nowa Żelazna from the beginning.

The cemetery turned out to be very well destroyed as a result of modern ploughing as it is located in the field. Still, in a few seasons researchers discovered dozens of ceramic urns containing burned remains of people. Archaeologists also found pit graves. In their case, the cremated remains had been poured directly into a pit in the ground.

"This year, we noticed interesting traditions associated with contemporary beliefs. In two graves, spearheads stuck into the bottom of the pit. It was done on purpose, probably for protection from the dead" - said Cieślak–Kopyt. She noted, however, that there were other interpretations of this unusual practice. For example, in the ancient Greece in the time of Homer, relatives of a murdered person would drive spears in the grave, which was a calling to the deceased to participate in an act of revenge.

Most of the urns discovered this year were richly decorated with band ornament in the form of meanders or herringbones. They are black vases with feet. In the tombs, archaeologists found spindle whorls, glass beads, knives, awls, metal parts of belts, clasps and weapons.

Burial ground belongs to the community referred to by archaeologists as the Przeworsk culture. This population is identified by most scholars with well-known from ancient written sources Germanic tribes, most likely with the Vandals.

This year\'s excavations were carried out in cooperation with the Prof. Tomasz Mikocki Regional Museum in Kozienice.