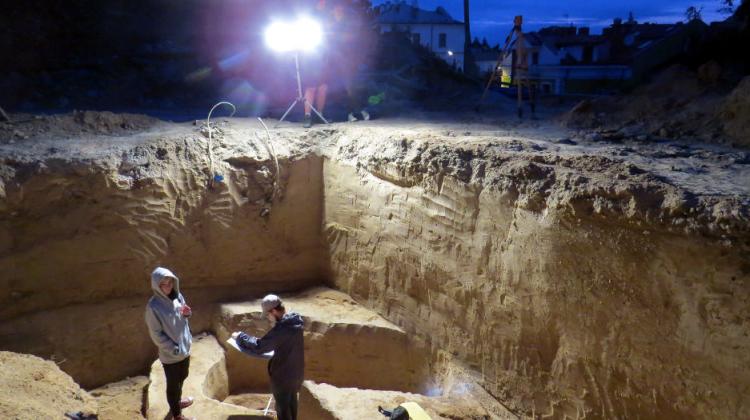 Excavations in Sandomierz, in the place where the unusual tomb was discovered. Photo by Monika Bajka

A large tomb, in the form of recessed in-ground wooden structure, has been discovered by archaeologists during excavations near Opatowska Gate in Sandomierz. This is the first such find in the Sandomierz region.

"In the vicinity of the grave we found fragments of broken pottery and traces of burning fire - probably remnants of funeral rites" - believes Dr. Marek Florek from the Institute of Archaeology of the Maria Curie-Skłodowska University in Lublin and Sandomierz Delegation of the Regional Office for the Protection of Monuments in Kielce, who participated in the excavations.

The walls of the burial chamber discovered by archaeologists had a palisade structure - built with closely adjacent wooden stakes. Within it, the remains of the deceased man were buried. At his head, archaeologists discovered an earthen vessel, and at the height of the neck an ornament - a ring made of silver. There were other items: clay spindle whorl, bronze clasp, a set for striking fire in the form of fire strikers and flints, as well as a knife and a bone tube, possibly used to fix a knife holder.

Archaeologists define the graves of this type as "chamber tombs". There are known primarily from the early medieval Scandinavia, Rus, areas of northern Germany, single graves of this type have also been found in other parts of Central Europe. They are generally regarded as the graves of representatives of local elites - tribal leaders, warriors - members of the princely teams. In northern Europe, they are often associated with the Vikings, in Russia with the Varangians, but discussion on the subject still continues in the scientific world.

Dr. Florek explained that in Poland chamber tombs had been found only in a few places, including Kałdus near Bydgoszcz, Bodzia near Włocławek, Ciepłe in Pomerania and several other villages. In Małopolska only one similar tomb has been known so far, discovered in Kraków - Zakrzówek.

"In the Polish lands, in the chamber graves were buried warriors - members of the first Piast princes’ teams, primarily Bolesław the Brave, merchants and their families, and at least in part they were of foreign origin - from Scandinavia and Rus" - said Dr. Florek.

The tomb discovered in Sandomierz fits this pattern. It comes from the early 11th century, which is consistent with the rule of the Piast Dynasty.

"It should be also noted that the vessels discovered in the grave, which probably contained food and drinks, as well as other objects, clearly indicate that we are dealing with burials of people that either were still pagans, or were formally baptized, but cultivated certain pagan traditions in funeral rituals" - said Dr. Florek.

According to the scientist it is likely that buried in these tombs were the representatives of local ruling elites who came to Sandomierz after its annexation to the Piast state at the end of the 10th century. Dr. Florek believes that the man laid in the tomb chamber was of foreign origin, not from Polish territory, perhaps he was not even a Slav. To confirm this, he planned to perform genetic testing of bones.

The chamber tomb was accompanied by several smaller graves. The dead were laid in wooden coffins. They come from the same period. In one of them, archaeologists discovered items considered to be of foreign origin - clasp made of bronze, which was used to fasten garments, and iron pickaxe. Clasps of this type are usually considered to be of Baltic origin, and were particularly popular in Rus between the 9th and 11th centuries. According to the researchers, a warrior rests in the grave.

The finds are important for archaeologists because so far they have been unable to determine the location of the oldest cemetery in Sandomierz. It functioned in the 11th and 12th centuries in the northern part of the current City Hill. Until now it was known only from accidental discoveries.

"The graves we now discovered are certainly the oldest burials from early Middle Ages, which have been discovered so far in Sandomierz. These finds shed new light on the origins of Sandomierz and are among the most important discoveries in recent years" - concluded Dr. Florek.

Excavations were led by Monika Bajka z from the District Museum in Sandomierz. The work lasted from 2013 to August of this year. Participating team of archaeologists was composed of: Patrycja Borkowska, Katarzyna and Michał Grabowski and students from the Institute of Archaeology, Maria Curie-Skłodowska University in Lublin.