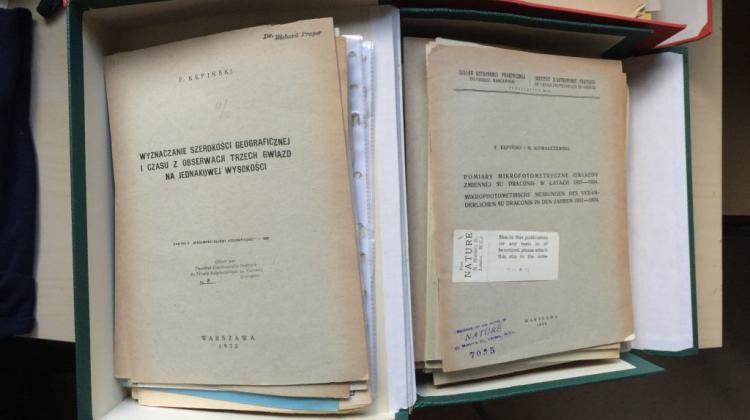 Almost all publications of Polish astronomers from several decades ago, rescued from British dumpster by a young Polish researcher, found their way to the National Library. Of particular interest was a list of works by Polish astronomers in the years 1923-1963.

A few years ago, documents related to the history of Polish astronomy ended up in the dumpster of London astronomical observatory. They were saved from destruction by Jakub Bochiński - currently a graduate student of the British Open University and researcher of planets outside the solar system, who then worked in the London Observatory. After a day spent browsing thrown the thrown away publications, he saved approximately 20 kilograms of documents.

The finds included 30 periodicals with publications of Polish astronomers - from the 1930s to the 1960s. There was also, for example, an index of all Polish scientific publications issued in these years. Among the rescued documents was also the Circular of the University of Warsaw Observatory from 1945 with the description of the destruction of the observatory by the SS during the Warsaw Uprising. "Among the publications was also a unique set: a pre-war publication of an astronomer, and post-war journal beginning with the obituary of that astronomer with a description of his death. The scientist was attacked by the Germans in his own home during the occupation, and then killed, most likely in the Pawiak" - Jakub Bochiński described in an interview with PAP.

A few weeks ago the rescued documents were brought to Warsaw and gained interest of outstanding Polish scientists: Prof. Andrzej Udalski - University of Warsaw Astronomical Observatory director and Prof. Jarosław Włodarczyk from the Institute of the History of Science PAS. "Professors reviewed the list of documents and decided that the best course of action would be to donate them to the National Library" - Bochiński told PAP.

He followed the professors’ advice and turned to the National Library. "It turned out that we had most of these publications only in one copy, and we should have two. There were a few titles we did not have at all, and almost everything has been added to the collections of the National Library. We had some of the material in two copies, but the donated volumes turned out to be in a better condition than those stored in our warehouses. We replaced them"- explained the head of the Bibliography of Foreign Polonica at the National Library, Witold Zakrzewski, who helped to secure the find.

Most of the rescued publication are in English. How did they end up in the London Observatory? "There were times when if scientists wanted to exchange scientific publications, they had to mail them. Therefore Astronomical Observatory of the University Warsaw would from time to time prepare a circular in Polish, French and English and send it to other research centres. In one of the documents I’ve found information that was issued in 750 copies, most of which were sent to Polish research centres, and some abroad. I am convinced that there are many more such documents" - said Bochiński.