Psychologist: Persons with schizophrenia believe their inner voices in their heads are strangers 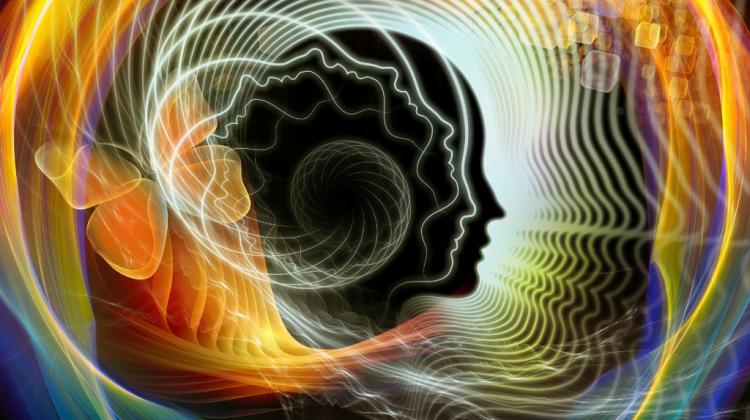 Everybody hears his inner voice in his head. However, people with auditory hallucinations in schizophrenia believe it is the voice of a stranger. Dr. Łukasz Gawęda speaks in an interview with PAP about the psychological determinants of hallucinations.

"Schizophrenia affects 1 percent of the population. More than three-quarters of these people experience visual or auditory hallucinations at some stage of the disease" - said in an interview with PAP psychologist Dr. Łukasz Gawęda of the 2nd Department of Psychiatry, Medical University of Warsaw and the University of Social Sciences and Humanities. In his research, the scientist focuses particularly on auditory hallucinations. "There are patients who hear squeaks, clicks, noise. Most often, however, what patients hear in hallucinations, are voices" - the scientist said in an interview with PAP.

He noted that this is related to the functioning of the brain. Every person hears his or her inner voice in the head. It allows us to tell ourselves what we should do, comment on current situation, remind about past events. "This is a dialogue with oneself" - noted Dr. Gawęda. He admitted, however, that people with schizophrenia believe that their inner voice does not come from them.

"When our mind is functioning properly, we do not think about whether the thoughts in our head are ours or not. It is clear to us that we are their authors. But some states teach us that it is not so obvious. The brain performs complex operations all the time - it must distinguish between ideas and reality in what it receives. And patients with schizophrenia confuse their own actions and words with those coming from outside. In other words, they are much more likely to have difficulty in identifying products of their imaginations as imaginary. They have the impression that what they imagine actually happens" - noted the psychologist.

He admitted that everyone sometimes says in his mind the things that are not pleasant, for example. "I would tear him apart!". People with schizophrenia sometimes are so reluctant to admit that it is their own voice that they recognize the voice as coming from the outside. Unfortunately, the sick do not have control over it.

The researcher emphasised that patients may have different explanations of the origins of voices. "Some people think that mafia from Moscow speaks to them. Others believe they hear their neighbour through the wall. Some believe that someone sends them thoughts through a radio transmitter. And sometimes people are certain that they hear the voice of God or Satan. The mechanism of hearing hallucinations is similar, but there are different beliefs about the origin of those voices. These beliefs are most likely a result of the lifer histories of patients, their experiences, relationships with others, and beliefs about people and themselves in general" - noted the researcher.

Dr. Gawęda described that sometimes the voices are so strong that patients are unable to oppose them. "Such a psychotic condition often requires hospitalisation and drug therapy. However, more and more importance is attached to the role of psychotherapy in the treatment of hallucinations and schizophrenia in general" - noted the psychologist. However, he admitted that some people with schizophrenia hear voices, but they know how to deal with them and behave normally.

The psychologist added that there is also a group of healthy persons who do not meet the criteria for mental disorders, who also hear voices in their heads. According to research carried out in the Netherlands, this affects as much as 5 percent of the population. These people have no difficulty with normal functioning and do not feel discomfort because of the voices, therefore do not meet the disorder criteria. "It happens, for example, after the loss of someone close a relative can hear that person talking. It is called a psychological phantom. This phenomenon is somewhat similar to phantom pain that can occur after amputation, when severed limb seems to hurt. And this due to the fact that there is still its representation in the brain. Often the voice plays an important, psychological role in dealing with the difficult reality of loss, or other difficult life situations" - compared the psychologist.

Auditory hallucinations may result from our expectations and attentional processes, for which the frontal cortex, strongly linked to the auditory cortex, is responsible. "When we are waiting for a phone call from someone, sometimes we are convinced that we hear the phone ring. Simply put, the frontal cortex sends a signal to the auditory cortex to prepare for the stimulus and the auditory cortex excitability increases. Hence the strange experience. In patients with schizophrenia the situation is similar. They often wait for the voices. They believe that someone is talking about them, they listen and begin to hear voices. This is why psychotherapy is important, it allows patients to change the attitude toward voices and reformulate the relationship with them to a less threatening one" - said the psychologist.

In Poland, schizophrenia is treated primarily pharmacologically, based on the assumption that the cause of the disease are biological changes in the functioning of the brain. "Meanwhile, more and more studies show that psychological mechanisms are important in the development of schizophrenia" - admitted the researcher and noted that it had already been shown that schizophrenia is more likely to develop in people with experience of early childhood trauma that has an impact on cognitive and brain functions. "We need to understand schizophrenia as not only a biological disorder, but as a complex, bio-psycho-social phenomenon. Forming relationships with people, our experiences (trauma) have a role in shaping our image of the world. Relationships with people and life experiences also influence brain development. If there are serious difficulties at any stage, mental breakdown may occur" - he added.

The psychologist explains that type of experienced trauma may even affect the accompanying symptoms of schizophrenia. "The spectacular research two years ago in UK showed that sexual abuse is particularly associated with the emergence of hallucinations in schizophrenia. And trauma such as school bullying, harassment by peers - has a closer connection with delusions" - sums up Dr. Gawęda.

The researcher assumes that psychotherapy may help in relieving the symptoms of schizophrenia. "During sessions, we try to convince patients who have hallucinations that what they hear in their heads are their own voices and that they can control them, because it\'s just an inner voice we all use. We want to teach patients how to distinguish between imagination and reality" - said the researcher. The therapist together with the patient wonders where the voices can come when there id no one around. The patient gradually acquires control over voices during therapy.

Dr. Gawęda is the author of the Polish version of meta-cognitive training for people with schizophrenia, which is already used in different centres in three provinces. "We check how people think, how their thinking can be distorted, and how these distortions may cause the symptoms" - said the psychologist. He explained that during therapy patients learn not only how to cope with hallucinations, but also delusions or persecutory thoughts. "Patients with schizophrenia often jump to conclusions. When, for example, they board a tram, they are at once convinced that everyone is against them. We teach patients that drawing hasty conclusions has consequences in the form of a immense fear, worry, being unable to leave home. We showed that through our therapy it is possible to decrease the severity of symptoms and improve patient awareness about the disease" - the researcher told PAP.

Dr. Gawęda also conducts research on whether people suffering from schizophrenia may confuse imagination with reality. To investigate, the psychologist in collaboration with a clinic in Hamburg conducted a psychological experiment: respondents were asked to imagine that they perform a simple activity, like raising their hands. After 10 minutes, people were asked whether they actually raised their hands or just imagined it. "It turns out that people with schizophrenia have difficulty differentiating what is imagined from what is real" - noted the researcher. It is not known yet whether confusing imagination with reality has a causal relationship with the development of schizophrenia. The psychologist would like to verify that in his further work. Currently he is conducting research that will help to understand the role of the brain in the difficulties of differentiating imagination from reality in schizophrenia using magnetic resonance imaging. He is also interested in the importance of early childhood trauma in these difficulties.