Archaeologists have completed work in the oldest bastion in Poland 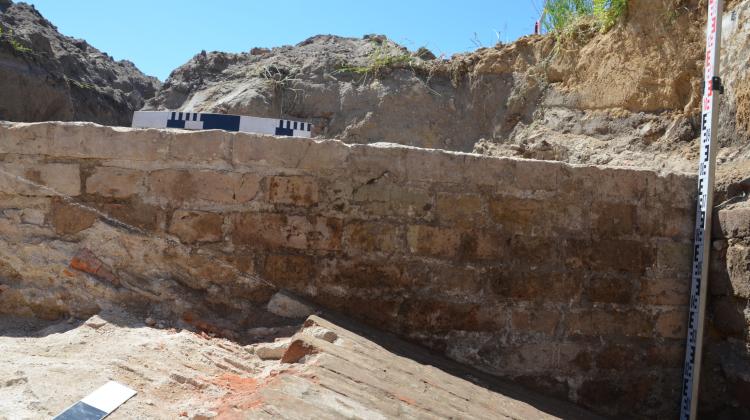 The slope of the sixteenth-century embrasure. Photo by M. Wichrowski

Relics of embrasures from the late sixteenth century, technical gas cylinders from World War II, as well as evidence of ... negligence of builders from two hundred years ago discovered archaeologists during excavations within the King Bastion of the Old Town of Kostrzyn nad Odrą.

The archaeological and architectural studies precede of restoration work aimed at opening the whole structure for tourism. Current activities focused on examining the technical condition of the accessible fragments of the building, in particular the vaults of its rooms. During this work, archaeologists made some unexpected discoveries.

"We found different levels of construction workmanship. For example, sixteenth-century parts of the King\'s Bastion are built with the best expertise and using the best materials. However, in the case of reconstruction and expansion of the building from the turn of the seventeenth and eighteenth century, we can talk about building bungle - all kinds of demolition material and poor quality mortar was used, not to mention disastrous workmanship" - explained Krzysztof Socha from the Kostrzyn Fortress Museum.

Socha noted that while the fortifications had been commissioned by the Prussians, poor workmanship should rather be credited to French architects who supervised the renovation work - they failed to ensure high standards of their employees’ work.

A surprising find was the discovery of 22 German technical gas cylinders - oxygen and acetylene. The researchers expected to find in this place a metal piece of the bastion equipment - door of a traverse, shelter within the embankment.

Archaeologists have discovered a huge number of objects, mainly in the layers of the embankment on the terrace of the bastion. There were fragments of broken pottery and glass vessels ranging from the Middle Ages to the nineteenth century, fragments of pipes. There were also animal bones.

The King Bastion is the largest preserved fortified structure of the Kostrzyn Fortress. It is the oldest bastion of this type in Poland. It is one of the most valuable relics of military architecture in Central and Eastern Europe. In literature it is mentioned for the first time about the year 1537, when Johann von Brandenburg-Küstrin decided to build a fortress at the confluence of the rivers Odra and Warta. Since then, the facility has been rebuilt several times. It changed its form and shape under the influence of engineers from many European countries: Italy, Holland, France and Germany, to fulfil its military functions.

Archaeological and architectural research was conducted at the request of the company Compono from Szczecin that prepares the King Bastion revitalization project for the city. The documentation will allow the city to apply for EU money for the bastion revitalization.

The cost of comprehensive work is estimated at about 20 million zlotys. So far, the city has managed to obtain funds from the Ministry of Culture and National Heritage in the amount of 220 thousand zlotys. Soon will begin the renovation of the internal counterfort of the curtain wall at King Bastion, for which the Ministry of Culture has allocated 150 thousand zlotys.