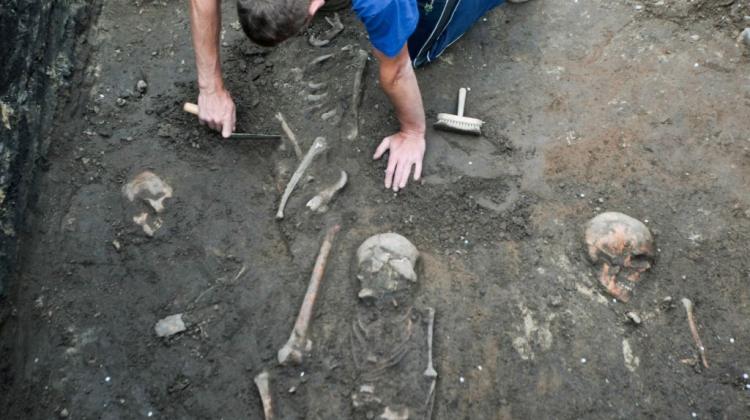 There are indications that part of today’s Santok near Gorzów Wielkopolski is located on the site of early medieval cemetery. During the archaeological work accompanying the construction of sewage system, archaeologists found skeletons arranged in a way characteristic for medieval burials.

Santok, now a commune village with a linear settlement arrangement with breathtaking views of the basin of Warta and Noteć, with origins dating back to the eighth century - the time of the construction of the oldest castle. Piast stronghold was situated on the left bank of the Warta, at the mouth of the Noteć. On the right bank of the rivers, life went on in settlements.

He added that the work only covered the road line and the area of the former cemetery is presumably much larger. This is confirmed by the reports of Santok residents, who frequently find human remains on their estates during earthworks.

"We preliminarily date the burials at the cemetery to the tenth to thirteenth century. The cemetery was used for a long time, as the skeletons are found in layers. The east-west arrangement of the dead - in accordance with the then canon - confirms that we are dealing with an early medieval necropolis. For the time being we do not know whether only the inhabitants of settlements surrounding the stronghold were buried here, or the stronghold residents as well" - Sinkowski told PAP.

The uncovered parts of the cemetery indicate that people in the Middle Ages were buried in coffins, in wooden covering or wrapped in shrouds. During the study of burials archaeologists managed to find many items near the skeletons, including head ornaments typically worn by Slavic women - temple rings.

"One of the sets of temple rings is intriguing as they are made of silver. The woman, who owned them, certainly was a prominent person in the community. Burial with ornaments of precious metal may in fact be a sign of social status and prestige of a person"- added Sinkowski.

In addition to the temple rings, archaeologists are finding other items by with skeletons, including iron knives and clay pots. In one of the tombs they discovered an iron tip of a spear, and in another a spur made of the same material.

"The so-called inventory accompanying the burials is not impressive, but it gives us an idea about the development of civilization of the ancient Slavs inhabiting these areas" - said Sinkowski.

Skeletons extracted from the earth are secured for further anthropological research. It will allow to determine their sex, age, and in some cases, cause of death.

Sinkowski noted out that with existing knowledge and technology the range of studies of human bones can be much broader, but large funds would be needed for that.

In the history of Poland, Santok (ancient Satok) was an important centre from the tenth to the twelfth century. The fortified position of the stronghold, located on a trade route, meant that it became a castellany and a parish, and thus played an important role in the forming state of Mieszko I and Boleslaw the Brave. Gall Anonymous wrote about Santok that it was "an outpost and key of the kingdom".

In June 1978 the Castle Museum was opened in Santok as a branch of the Regional Museum in Gorzów Wielkopolski, which is now part of the Department of Archaeology of the Museum of the Lubusz Region.

The main attraction of the museum was an archaeological exhibition, which presented the history of early Santok based on the monuments from archaeological excavations in the years 1958-1965.

After the renovation of the museum building in 2005, new exhibition was opened, called "The history of The Stronghold in Santok". This exhibition, like the previous one, is based on finds obtained from studies after the war, but has been extended to include the collection of old German monuments.