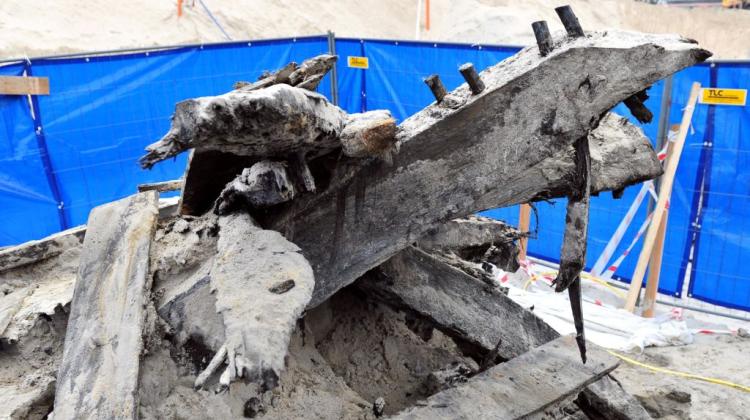 Wooden boat wreck recently discovered in Świnoujscie (Western Pomerania) is more than 100 years old, according to the preliminary findings of the West Pomeranian conservator. Detailed studies will provide more detailed information on the age of the find.

The conservator has already examined part of the wreckage. According to his preliminary examination, the wooden vessel could have been built in the nineteenth century or earlier - told PAP West Pomeranian deputy conservator Tomasz Wolender. He added that more detailed information about dating or purpose of the vessel will be known after the commissioned studies are completed.

The wreck was found near the beach, where previously there was no land; at this spot the sea throws sand on the beach causing it to enlarge. It can be assumed that the boat was pushed and sank at this spot, it could also have been deliberately abandoned or sunken - Wolender said. This kind of finds are rare on land, studies of them are usually conducted under water - he added.

In March workers employed at the construction of the hotel came across the wooden hull.

The investor Zdrojowa Invest informed that wreck was about 10 meters underground. After the discovery part of the damaged hull work was stopped. It is estimated that the earth may hide a boat with the length of ten meters, and two to three feet wide.

The investor secured the area around the wreck and is not carrying out construction work at this place. Renata Sobczyńska of Zdrojowa Invest told PAP that the company is now waiting for the initial report of the conservator, and the actual expert opinion can be expected in a month or two.