Archaeologists studied the remains of Biskupin-type fortified settlement in Germany 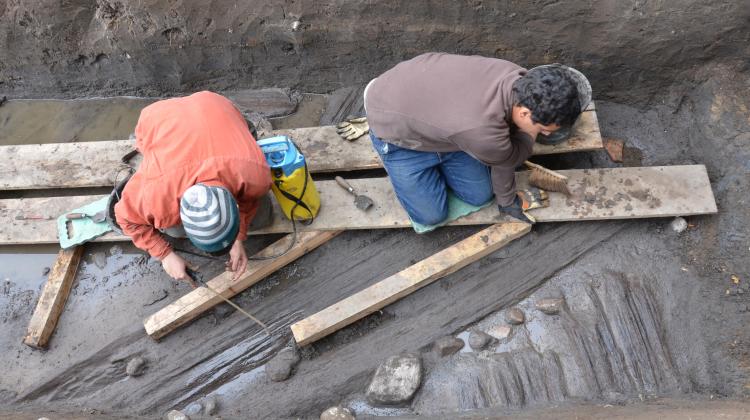 In the town of Kemberg near Wittenberg (Saxony-Anhalt), Polish-German team of archaeologists studied the westernmost city of the communities belonging to the Lusatian culture of the Bronze Age and early Iron Age - told PAP Prof. Zbigniew Kobyliński, director of the Institute of Archaeology, Cardinal Stefan Wyszyński University in Warsaw.

Remnants of the fortified settlement are located on the eastern edge of the city. In the field, they can be seen as a small, oval hill surrounded by wet meadows. During excavations, archaeologists found a perfectly preserved multi-layer platform made of planks and beams that probably formed the base of the embankment protecting the settlement. Before the structure they found pillars driven in the sandy ground, which may indicate the presence of a wall or palisade.

Prof. Louis Daniel Nebelsick, one of the project leaders explained that the discovery comes from the end of the Bronze Age, the period between 1000 and 800 BC, which is the earliest dating of a Biskupin-type settlement.

Biskupin-type fortified settlements were characterized by dense internal layout in the form of regularly arranged parallel rows of houses, divided by streets lined with boards. Additional communication route ran along the inside of the fortification - box-wall surrounding village. Interestingly, in these settlements archaeologists have yet not encountered structures distinctive in size from others, which would indicate the residences of the leaders and the elite.

Settlement in Kemberg survived hundreds of years until the sixth century BC - according to the data obtained during the excavations. For comparison, the settlement in Biskupin was built in the first half of eighth century BC and probably existed only a few dozen years. According to the researchers, in Kemberg it was also possible to record traces of rituals that took place on the border of the settlement and the surrounding swamp - in wet layers at the foot of the rampart. They appeared in the form of a cluster of a large number of high-quality ceramic vessels. Archaeologists also found a rattle in the shape of a bird and animal bones.

Settlement abruptly ceased to exist in the beginning of the sixth century BC. This is evidenced by the remains of a disastrous fire in the form of thick layers of charcoal and charred beams.

Excavations were carried out in September 2014 by scientists from the Saxony-Anhalt Office for Archaeology and the Cardinal Stefan Wyszynski University. The research leaders were Prof. Louis D. Nebelsick, Dr. Anna Swieder and Dr. Katarzyna Zeman-Wiśniewska.