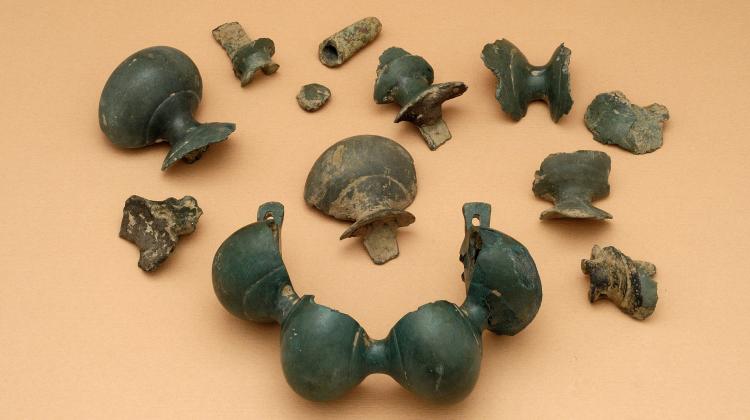 Bronze bracelet from the 3rd century BC has been discovered in Pakoszówka near Sanok (Subcarpathian province). This ornament is one of the most valuable objects associated with the Celts discovered in the region - told PAP Piotr Kotowicz, an archaeologist with the Historical Museum in Sanok.

Scientists were informed of the discovery by the finder. Only fragments of the bracelet were preserved. According to the archaeologist, it is hard to determine the circumstances in which the ornament ended up in the ground. The fact that it was discovered in the fragmented form drew the attention of scientists - it could be deliberately destroyed.

Archaeologists know from previous studies that ancient Celtic settlement had existed near the village Pakoszówka. There are other monuments of this period in the collections of the Historical Museum in Sanok - mainly fragments of pottery, a fragment of glass bracelet and a gold coin. "Maybe the owner of the bracelet lived in the village, the traces of which have been recorded in the same place" - believes Kotowicz.

The archaeologist explained that the Celts arrived in the basin of the San approximately in the middle of the 3rd century BC. They came over the Carpathians, from the area of Upper Tisa. According to some researchers, the Subcarpathian region was inhabited by the Anartofrakt tribe mentioned by Ptolemy and Julius Caesar.

The Celts were a warrior people, who in the first millennium BC spread to places as distant as the western part of Europe (Iberian Peninsula), and even to Asia Minor. Scientists believe that they originated from the area in the basin of the Upper Rhine, Danube and Main.

Celts became famous for their brilliant conquests - the primary meaning of the term "Celt" is "warrior". It probably had been used by the Celts themselves to praise their own feats, conquests. The Celts were the pioneers of the use of iron in Europe. The metal played an important role in their lives. Collective imagination today is awakened by the elite of the Celts, which included the Druids. It was a highly educated class, whose occupations included medicine and the various types of science, and probably cult activities.