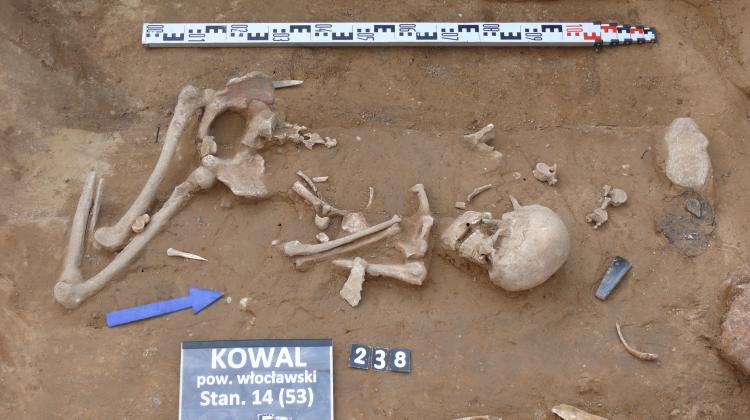 Burial, which provided scientists with a wealth of information. Photo by G. Osipowicz

Neolithic complex of cult structures belonging to the representatives of the Globular Amphora Culture (3250 - 2400 BC) in Kowal (province Kujawsko-Pomorskie) has been studied in recent years by archaeologists led by Dr. Grzegorz Osipowicz from the Institute of Archaeology of the Nicolaus Copernicus University in Toruń. The results of interdisciplinary studies have just been published.

"The place had been used for a long time, and the ceremonies performed here were very complex. There is evidence that the rituals had been spread over a number of years - as in the case of animal sacrifices" - Dr. Osipowicz told PAP.

Most important information resulted from the studies of the discovered human burial, located near a monumental structure built of boulders weighing hundreds of kilograms. According to the researchers, buried in this grave was a victim of ritual murder, coming from the tribal aristocracy.

"Palaeoserology analysis helped to identify the buried person’s blood type, which is the first such case in the history of European Neolithic research. The same is true for DNA studies, which are the first in the world literature description of a representative of the Globular Amphora Culture, and one of the few of a Neolithic man" - emphasised Dr. Osipowicz.

According to the researchers, some of the discovered alleles are the oldest of the human remains identified so far. As a result of DNA testing, researchers were able to confirm individual traits such as lactose intolerance and genetic relationship of the deceased with the region of the Fertile Crescent - the most fertile area of the Middle East. Scientists also know the diet of the deceased. The analysis of stable carbon and nitrogen isotopes showed that a very important part of his diet was millet - a share of 25 percent. "This is the earliest isotope evidence of the presence of this cereal in the human diet in Central Europe" - believes Dr. Osipowicz.

Interesting conclusions came from the chemical analysis of binder collected from between the arms of a T-shaped bone ornament that archaeologists discovered in the tomb. The results suggest that it is the oldest lime binder in Eastern Europe. At the same time it is a proof of knowledge of the process of obtaining the raw material in today’s Poland already in the late Neolithic period.

Publication of the bilingual monograph "Kowal 14. Miejsce sepulkralno-obrzędowe ludności kultury amfor kulistych/Kowal 14 Sepulchral and ritual place of people representing the Globular Amphora Culture" under the editorship of Dr. Grzegorz Osipowicz was subsidised by the Ministry of Culture and National Heritage under the priority "Protection of Archaeological Sites". The book is not available commercially, but free excerpts are available at ResearchGate and Academia.edu.