Opening ceremony of another part of the Temple of Hatshepsut 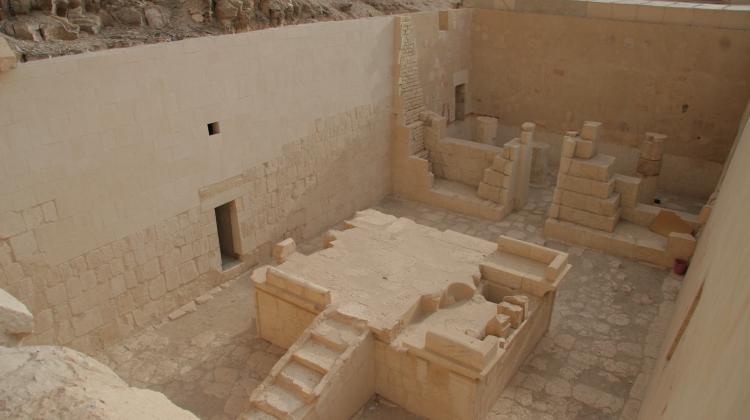 In the foreground: the Solar Altar. Photo by M. Jawornicki

Opening ceremony of the Solar Cult Complex in the temple of Hatshepsut, reconstructed by the Poles, was held on Sunday, February 22 - reported the University of Warsaw on its website.

Temple of Hatshepsut is considered one of the most original and picturesque structures of its kind in Egypt. It is one of the main tourist attractions within the Theban necropolis near Luxor. It was built in the fifteenth century BC beneath the cliffs at Deir el Bahari, in honor of one of the few women who ruled Egypt. The building, partly carved in rock, consists of three terraces connected by ramps and topped with porticos.

Polish work on the reconstruction of the Upper Terrace of Hatshepsut’s temple started in the 1960s, under the supervision of Prof. Kazimierz Michałowski. Currently, the mission is headed by Dr. Zbigniew Szafrański.

Joint, interdisciplinary work of several generations of archaeologists, conservators and architects allowed to reconstruct the Upper Terrace, which includes now opened for tourism rooms of the Solar Cult Complex. Polish achievements include restoration of the original appearance of this part of the temple, determining the function of its premises, as well as an explanation of the chronology of their creation. "There was also an attempt to reconstruct the original appearance of the courtyard of the Solar Altar. It is believed there could be a sacrificial table and two obelisks" - reads the release sent to PAP.

Solar Cult Complex is a group of rooms located in the northern part of the Upper Terrace, which consists of the Night Sun Chapel, Solar Altar Court and the Anubis Shrine. As the researchers explain, this it the place of worship of Amun-Ra, as well as Ra- Horachty and Atum-Amun - representing two other aspects of the solar god. Night Sun Chapel is located in the eastern part of the complex, reflecting the idea of the resurrection of the sun on the eastern horizon after an overnight journey by barge through the Underworld. Sculptural decoration of the chapel illustrated the overnight journey. The altar, according to Egyptian custom, is located in the courtyard under the open sky, so that the life-giving rays can reach it without hindrance. The priests would walk up the stairs to the top of the altar to offer sacrifice to the Sun - the researchers believe.

The official organizer of the opening ceremony was the Egyptian Ministry of State for Antiquities in cooperation with the PCMA Research Centre in Cairo and the Embassy of the Republic of Poland. Due to the significance of the monument for World Heritage and the status of the event, Egyptian Minister of State for Antiquities and Heritage Dr. Mamdouh Eldamaty announced his participation in the event, as did Prime Minister of the Government of Egypt, the Minister of Tourism and the governor of Luxor. The Polish side was represented by Michał Murkociński - Polish Ambassador, Dr. Tomasz Waliszewski - Director of the Centre of Mediterranean Archaeology of the University of Warsaw and Dr. Zbigniew Szafrański, Director of the Station in Cairo.

The website of the Polish-Egyptian Archaeological and Conservation Mission in the Temple of Hatshepsut at Deir el-Bahari was launched in October 2014. It presents projects carried out within the complex, a database of finds and history of activities.