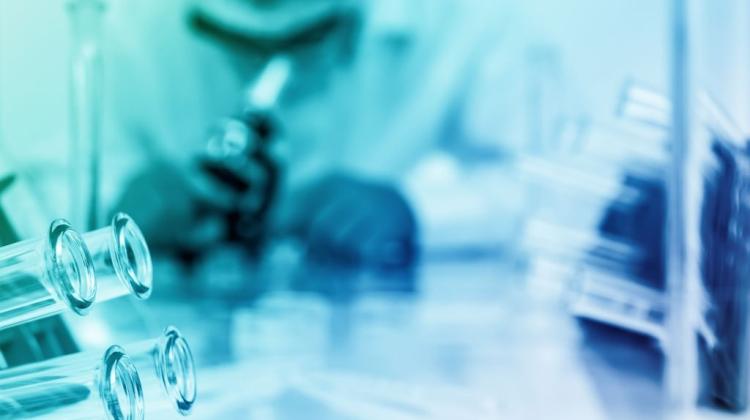 Researchers at the Łódź University of Technology developed an innovative hydrogel dressing for the treatment of diabetic wounds. The dressing supplies tetrapeptide to the wound, which may cause the restoration and formation of new blood vessels.

According to scientists, the use of such a dressing may reduce the number of amputations.

Treatment of diabetic wounds is now, both in Poland and in the world, a bigger problem than the treatment of other types of wounds. The costs of such treatment, as well as the social impact of diabetic wounds, is enormous - in Poland, more than 10 thousand amputations of limbs per year are performed for this reason. Due to the nature of these wounds, until now scientists have been unable to develop biomaterials that would significantly increase the probability of recovery.

The team of Prof. Janusz Rosiak of the Institute of Applied Radiation Chemistry, Łódź University of Technology, developed a technology for producing hydrogel dressings enriched with tetrapeptide, which induces angiogenesis, resulting in the restoration and formation of new blood vessels within the wound. Cellular assays of such biomaterials produce positive results.

The dressing is based on hydrogel dressing developed by Łódź scientists, which - according to their technology - has been produced all over the world for over 20 years. It has the properties of "ideal" dressing, allowing to achieve excellent results in the treatment of burn wounds, bedsores and hard to heal wounds, for example trophic ulcers.

Hydrogel wound dressing applied directly to the wound provides access of oxygen to the wound, acts as a barrier against infection from the outside, absorbs exudates, provides a moist environment, relieves pain, and when removed from the wound it takes necrotic tissue. At the same time, it allows to dispense the drug substance (in this case tetrapeptide) with a constant, predetermined rate, without the need for medical intervention.

"It seems that the solution we have developed can be highly useful in the treatment of diabetic wounds. The cost of production of the dressing is very low, and its production can be started virtually with no large investments" - told PAP the inventor of the dressing, Prof. Janusz Rosiak.

Dressing for the treatment of diabetic wounds now requires pre-clinical and clinical trials, which - as Prof. Rosiak notes - are not funded by the state. "Therefore we want to cooperate with companies interested in the production of such dressings" - he added.

During treatment with the classic hydrogel dressing produced according to the Rosiak method, it was found that the dressing exhibited a beneficial effect also for the treatment of so-called diabetic foot, but the likelihood of recovery for this type of wound was about 50 percent - as much as with other well-known types of dressings.

It has to do with the specifics of diabetic wounds, which include wound tissue necrosis caused by damage and destruction of blood vessels. This also involves destruction of nerve tissue and gradual death of the tissue surrounding the wound.

Attempts to treat this type of wounds, made in Poland and in the world, involve identifying the types of bacterial infections and the use of antibiotics or other active substances that can "clean" the wound. While waiting for the wound to heal, agents can be supplied to it that cause angiogenesis, the restoration and formation of new blood vessels within the wound. Substances tested for this purpose include a number of growth factors.

Prof. Rosiak explained that in their research the scientists from Łódź came across reports in the literature on the use of a simple tetrapeptide to induce angiogenesis by delivering it to the treated area of the body. It is a natural compound formed in the human body, with a relatively short half-life of about 5 min, hence its concentration in a normally functioning organism is very small. This tetrapeptide was registered as a drug and authorized by the US Food and Drug Administration (FDA).

"However, administration to the tissue surrounding the wound was carried out by means of injection, making it impossible to control the action area and causing the typical effects - rapid achievement of high concentrations and equally rapid disappearance, thus negating its therapeutic effect. Our original idea is an attempt to combine tetrapeptide with the hydrogel dressing" - said the scientist.

Hydrogel dressing manufacturing technology developed by researchers from Łódź consists in creating a mixture of ingredients of the dressing in water (water accounts for more than 90 percent composition) and then, after filling it in the container and closing, subjecting it to sterilization by electron beam. As a result, a sterile hydrogel flap forms, which is used as a dressing.

"The research question was whether the active substance would not be destroyed during sterilization, because tetrapeptide in aqueous solution under the influence of the electron beam is totally destroyed by electrons at doses that do not yet ensure the sterility of the product. We were, however, able to solve this problem" - added Prof. Rosiak.

Patent application for the solution has been submitted to the Patent Office. With the financial support of the National Research and Development Centre, Łódź scientists have conducted studies on the kinetics of tetrapeptide release into the wound, its durability in the dressing (it can be used even one year from the date of manufacture), and interaction with the cells.

"On the molecular level we have confirmed the expression of genes involved in angiogenesis, and on the cellular level a significantly accelerated proliferation of endothelial cells. We have shown the dependence of the effects obtained on tetrapeptide concentration, and determined the optimum dosage" - Prof. Rosiak noted.

Scientists announced that if they fail to find sources of funding for further studies on the dressing, they might publish the know-how of their idea. "The problem of the so-called diabetic foot treatment affects people all over the world and we do not necessarily have to use it to make money" - believes Prof. Rosiak.