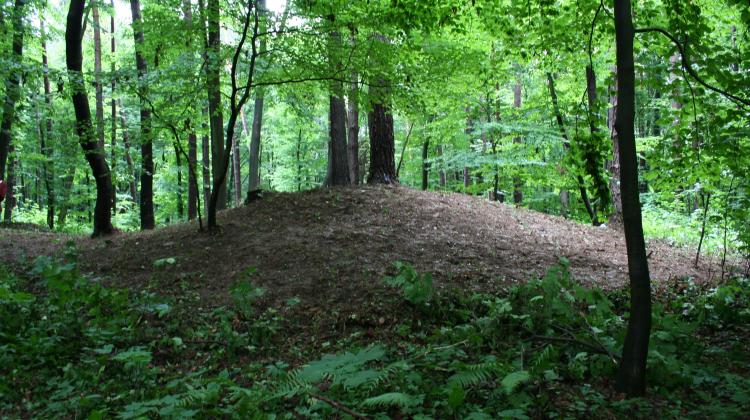 The barrow before the study. Photo by Michał Jakubczak

Five rich burials and ... a World War I firing post have been discovered in Stryjów in the Lublin province, during the study of the barrow from the Bronze Age by a team of archaeologists led by Dr. Piotr Włodarczak from the Institute of Archaeology and Ethnology PAS in Kraków.

The ancient, monumental grave have long escaped the attention of researchers of the ancient history, because of its location in the forest. Archaeologists usually explore places once used by the people in cultivated fields, where it is much easier to spot fragments of pottery or stone or flint tools on the surface.

This time, archaeologists had the support of modern technology. The researchers analyzed the results of laser scanning (ALS) from an aircraft. This active remote sensing technique using LIDAR (Light Detection and Ranging) devices works on the principle of emission of laser pulses in the direction of the earth\'s surface. Once they are reflected from obstacles, echoes that return to the receiver are measured. Scientists are able to virtually remove trees and other obstacles and obtain the terrain elevation data. This makes it possible to discover old man made structures, including mounds.

"It turned out that the recorded object was in fact an ancient burial mound. Importantly, the mound is the first known structure of this type in the Lublin Upland, as well as throughout Małopolska, probably dating back to the turn of the third and second millennium BC" - explained Prof. Piotr Włodarczak.

Inside the barrow measuring approx. 13 m in diameter, archaeologists discovered four skeletal graves belonging to a community whose material remains are referred to by experts as the "Strzyżów culture". Its representatives were engaged in agriculture and animal husbandry.

"The burial rite is slightly different than in the earlier period, the late Neolithic. The mound we examined had not been raised a single grave of a chosen person, but a few graves" - said Dr. Włodarczak.

All burials were similarly equipped, but in the central part of the mound certainly the most important person had been buried, as evidenced by both the position of the grave, as well as its size. In all graves, archaeologists discovered hundreds of beads made from clam shells, copper jewellery (including a unique temple ring), animal fang pendants and flint tools.

In the upper part of the mound, inside the longitudinal cavity, archaeologists discovered three shells from a Mauser rifle and iron fitting of a wicker ammunition basket. "There probably was a firing post at the top of the mound during the World War I military operations" - the researchers believe.

This assumption is confirmed by other finds scattered on the ancient barrow. They include a number of lead balls of shrapnel, rifle bullets, several small fragments and more shells.

On the basis of three 14C tests (radioactive carbon analysis - a popular method in archaeology for dating organic finds) made in Poznań Radiocarbon Laboratory for bones from three burials discovered in the barrow, it can be concluded that the structure was raised in 2100-1900 BC, in the beginning of late stage of early Bronze Age.

According to the researcher, the kurgan rite was reserved only for the selected, privileged group. The rest of the dead were buried in flat cemeteries. The appearance of the barrow graves about 4 thousand years ago coincided with contacts between the communities inhabiting the Lublin Upland areas with those from the North Pontic zone, that is, from the steppes on the border of Europe and Asia. At that time, there was an of "steppe" communities to the neighbouring areas: Podolia and Volhynia. New relationships changed the belief system in south-eastern Poland.