Archaeologists discovered a rich settlement from before 1.5 thousand years in Mazury 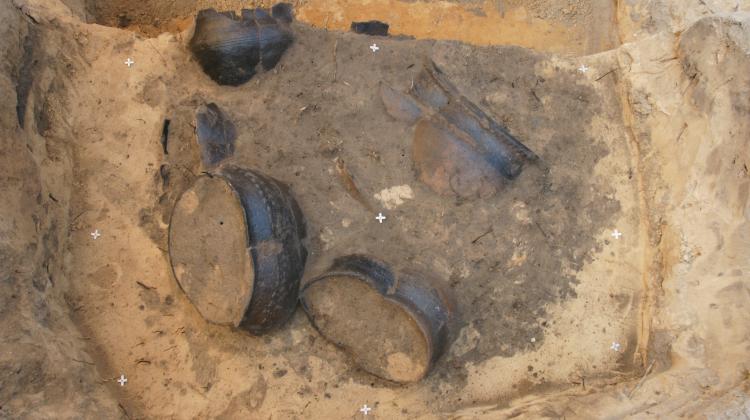 Numerous fragments of pottery and dozens of objects made of bronze and iron have been discovered during excavations in Skomack Wielki.

"The very fact of the discovery of so many valuable objects within a settlement, not a cemetery, is rare in the region" - told PAP Dr. Anna Bitner-Wróblewska, head of the research project.

Archaeologists stumbled upon the remains of settlements from the fifth and sixth centuries at the foot of an early medieval castle town. Among the most valuable finds are ornaments, brooches and buckles made of bronze, as well as toiletries (tongs) and knives. In one place, archaeologists discovered cluster of entirely preserved 7 ceramic vessels. They differ in size, finish (some carefully smoothed, some rugged), decoration in the form of plastic strips, ornaments made with fingers or engraved. "The whole deposit gives the impression of a specially selected set, although at this stage of research it is difficult to say what was the purpose of selection and of the pit, in which the vessels had been placed" - commented Dr. Bitner-Wróblewska.

Scientists have transported the vessels to a specialized laboratory at the National Archaeological Museum, where the contents will be checked.

Dr. Bitner-Wróblewska explained that the population living at the time in the vicinity of todays Skomack Wielki may be associated with the Sudovian/Yotvingian tribe, but the community, which inhabited the settlement studied by the archaeologists, probably belonged to their brethren from the area west of the Great Masurian Lakes - the Galind tribe. The community had extremely extensive contacts with large areas of Europe - the areas near the Danube and the Black Sea, Western Europe, Scandinavia, and the Volga region.

Excavations and a series of non-invasive tests were carried out in the spring and summer of last year as part of the National Archaeological Museum in Warsaw project Polish-Norwegian Modern Archaeological Conservation Initiative "Yotvingian Archaeology". The main objective of the project is to explore two important early medieval settlement complexes in Yotvingia - in Szurpiły and Skomack Wielki.