The first archaeological studies of the fifteenth-century monastery in Wągrowiec 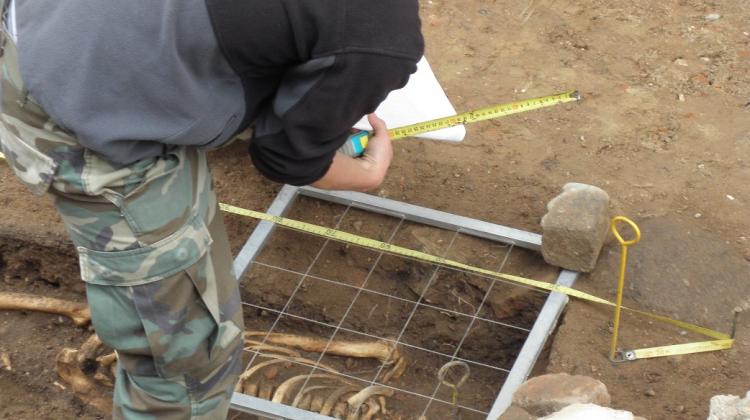 The foundations of medieval monastery church and a seventeenth - eighteenth century crypt containing burials have been discovered by archaeologists during the study of the former Cistercian monastery complex in Wągrowiec (Wielkopolska) - currently the Pauline Monastery and Parish of the Assumption.

Cistercian monks arrived in Wągrowiec in the late fourteenth century, when the abbots of the nearby Łekno decided to move the seat of their convent. The construction of a monastery and church started. However, the construction of the latter took almost a hundred years. The main altar was consecrated in the late Middle Ages, in 1493. "This situation was the result of the size of the complex and financial problems of the clergy" - said Marcin Krzepkowski, who led the excavations on behalf of the Regional Museum in Wągrowiec together with Tomasz Podzerek.

The monastery has not survived to our times. It repeatedly fell victim to fires, with time it completely lost its original Gothic form. In January 1945, it was destroyed in the fire set by retreating German troops.

"Despite its rich history, the Cistercian monastery has never been the subject of archaeological research. Archaeologists missed the excellent opportunity posed by long-term reconstruction of the complex in the years 1945-1978" - described Krzepkowski.

This year, they had another opportunity in connection with the construction of storm water drainage. The number of discoveries surprised the researchers. The excavations continued for four months, until November 2014. Archaeologists unveiled the foundation of the nave, built of stone and bricks with lime mortar joints, and the foundations of the aisles. They also managed to discover the remains of the sixteenth-century St. Anna chapel from the time of Abbot Nicholas II Bimontanus, mentioned in "Wągrowiec Chronicle". It was built from large boulders unbonded with lime mortar.

During this year\'s study, it was determined that the width of the Gothic church was approx. 24 meters and was built on a cruciform plan - until now historians did not have any information on the shape of the building. The temple had a slightly different orientation compared to the currently existing late-Baroque buildings, which were built using only part of the earlier foundations.

During excavations in the north aisle of the church, archaeologists found a crypt and burials by the foundation digs. The dead were laid in the 17th and early 18th century.

"Bricks were arranged around the head of one of the dead. This was an interesting tradition, particularly strong in the modern era in Pałuki, Kujawy and in the northern part of Wielkopolska, often interpreted as anti-vampiric treatment. It seems, however, that this procedure was designed to stabilize the head of the deceased in such a way that his face was turned toward the east and toward the altar" - argued Krzepkowski.

In the crypts archaeologists found numerous monuments - fragments of late medieval and modern pottery and broken windows. The most interesting finds include liturgical books, coins, fragment of a terracotta sculpture and of the base of a stone sculpture.

Excavations have also shown that hundreds of years ago the site of the Cistercian monastery was inhabited by people. Archaeologists have found traces of settlements from the Roman period, approx. 2 thousand years ago.

"In addition to the traditional drawings, photographic and descriptive documentation, thanks to funds from the Wągrowiec city budget we performed laser scanning (3D) of the exposed relics of architecture and earthen profiles" - said Krzepkowski.

Due to the fact that not all the area of the old Gothic church could be excavated, archaeologists used a geophysical method - proton magnetometer, which allowed insight into the ground.