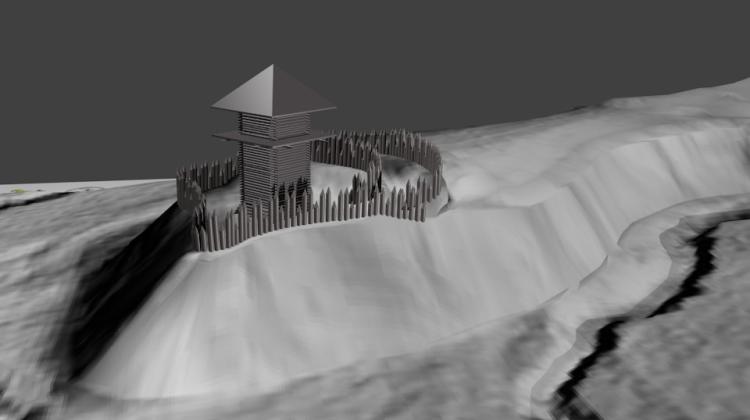 Mysterious relics of embankments in the village Bieździadka in the Strzyżów foothills, in the western part of Garb Warszycki have been discovered by archaeologists from Jasło, Joanna Pilszyk and Piotr Szmyd. The structures could be associated with an unknown medieval episode of the presence of Czech Hussites in this small village.

The fortifications were discovered on a narrow leg of the point dropping to the brook Bieździadka. The place was protected from three sides by the natural steepness of the slopes. From the side of the plateau, the easiest access, it was secured by means of two embankment lines and preceding moats. Even today, the height of embankments reaches over 2 m. Archaeologists believe that the fortifications were topped with a fence or palisade.

"The area of the settlement is intriguing. Together with the embankments, it occupies an area of only 900 square meters. This small space could accommodate only one small house or defence tower" - explained Piotr Szmyd.

Scientists ruled out the possibility of the place serving as a watchtower or vantage point - even from a tower, extensive view of the surrounding area would be impossible. Archaeologists suggest that the person who ordered the construction wanted to hide between the hills, which is further confirmed by the location away from the main rivers.

A clue for scientists was the local name of the place, the "Cat Castle" (Koci Zamek), which indicates that the fortifications were built by Hussites escaping from the Czech lands in the fifteenth century. They could therefore be relics of a camp of military coaches (in Czech "koča" is a coach, and "koči" means a coachman). Local legends also tell about the Bar Confederates buried in a place called Cat Castle.

The researchers made the discovery by using airborne laser scanning (ALS). The Computer National Protection System (ISOK, Informatyczny System Osłony Kraju) also provides for the needs of archaeologists the images obtained with LIDAR, device that emits laser pulses in the direction of the ground from the transmitter suspended under a moving airplane. Echoes that return to the receiver after reflection from the obstacles are then subject to further measurements. The method allows to virtually remove trees and other obstacles, and obtain the terrain elevation data. It is then possible to discover archaeological objects with their own landscape forms such as burial mounds, embankments or relics of settlements.

After noticing interesting anomalies on the computer screen, archaeologists decided to go into the field. Reconnaissance took place in April 2014. In the following months, the researchers conducted surface surveys within the embankments, also with the help of metal detectors. Unfortunately, they could not find any historical objects that would confirm the origin of the structure.

"Who, when and why built these embankments, remains a mystery for now. The fortifications were probably built in the late Middle Ages, but the dating of the object remains an open question. Is this the +Cat Castle+ and the location where the Bar Confederates were buried? These questions can only be answered by archaeological research" - concluded Szmyd.