Polish museum has developed an innovative method of documenting wrecks 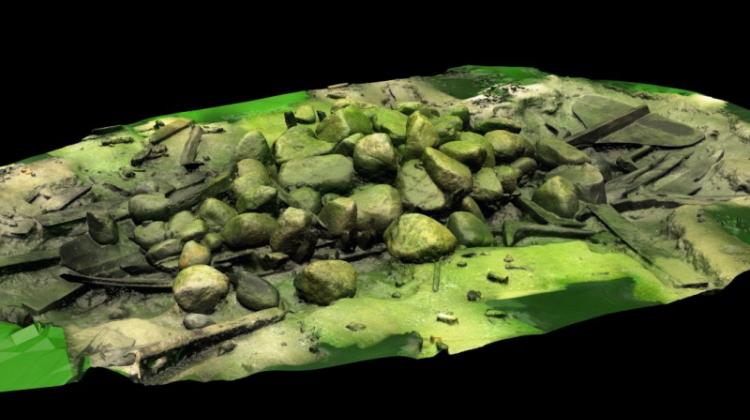 Three wrecks resting in the Gulf of Gdańsk finally have 3D documentation prepared by the employees of the National Maritime Museum (NMM) in Gdańsk. The innovative method allows underwater archaeologists to work effectively even with minimal visibility.

The procedure is as follows - divers descend into the water equipped with cameras. They take a huge number of pictures of all the elements of the wrecks and their surroundings, at various angles. Then, with the help of specialized software acquired images are combined into one coherent whole, creating a photogrammetric, accurate, three-dimensional image of the documented object.

The map also includes the wreck surroundings. The innovative method allows for non-invasive, not disturbing the object, documenting of ships in the place of discovery. It is an alternative to traditional underwater drawing documentation, which is much more time-consuming and usually less accurate.

"Spatial, 3D model of the wreck built on the basis of photograms gives you an opportunity to present its state of reservation and the spatial arrangement of its individual elements" - said Tomasz Bednarz, underwater archaeologist and lead 3D developer of Undersea Research Department at NMM.

The method was first used in 2013 to document the 19th century wreck called "Porcelanowiec" (porcelain ship) because of the ceramic cargo, mainly porcelain and English earthenware from Staffordshire. Photogrammetry of this ship was the first attempt in Poland and one of the first in the world to prepare a 3D documentation of underwater archaeological site.

This year, underwater archaeologists used the new method to document "Głazik" (little rock), which is more than 200-year-old ship that carried stone material. Tomasz Bednarz explained that the documentation method had been improved after last year\'s experience with "Porcelanowiec".

"The 3D model of the wreck F 53.31 +Głazik+ was based on more than 6 000 photograms. It is much better quality than last year\'s 3D model of the +Porcelanowiec+ wreck"- emphasized Tomasz Bednarz. - "We are pleased that we can create these models even at low water clarity, without loss of quality. Just few feet of visibility is enough to create such a model".

Bednarz believes that the models are an excellent form of documenting sites and can be used to monitor the state of preservation of underwater objects and changes therein. In the case of noticing any changes at the site, the model can be redone and the obtained images compared. An important aspect is the ability to create animations and virtual shots of underwater sites and its components, also for exhibition and educational purposes.

Since 2013, the method is simultaneously used and developed by two research centres: the National Maritime Museum in Gdańsk and Texas A&M University (Gnalic Project). Research carried out in Poland is possible thanks to funding from the Ministry of Culture and National Heritage, both for the last year\'s "Porcelanowiec" project and the "Głazik" project implemented this year. Currently, the documentation work is underway for another vessel resting in the Gulf of Gdańsk.