Village from the Roman period discovered in the Carpathians 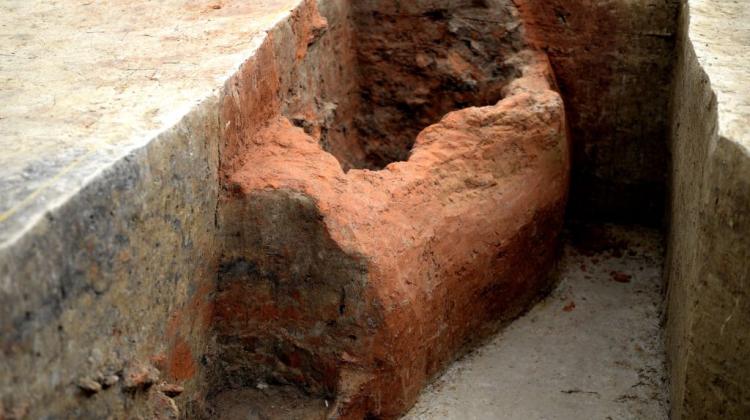 Village from the Roman period, dating from 3rd-4th century AD, has been discovered in Lipnica Dolna near Jasło (Subcarpathia). Among approx. one thousand archaeological objects there is a large pottery kiln, in which ceramics were fired.

"The kiln is two meters in length and the same in width. It stands on a small tip in the Wisłoka valley. Its location shows that the wind blowing from the river was used to maintain the temperature during the firing cycle" - said Tomasz Leszczyński, archaeologist from the Subcarpathian Museum in Krosno.

He added that "such kilns are extremely rare in the Carpathians". "So far two similar structures have been found, in Krosno and Sanok" - he emphasised.

During the study, archaeologists found fragments of pottery and fired clay. These include large, measuring approx. 1 meter vessels, which could be used to store grain. According to Leszczyński, the kiln was used to fire hand-made ceramics formed on a wheel.

"Dating back to the 3rd century of our era, the kiln was in a large settlement from the late Roman period. There may be more similar furnaces here" - noted the archaeologist.

Excavations in Lipnica Dolna started in July. The village was selected also because during archaeological surface surveys in the early 1990s archaeologists found pottery from the Roman period.

The settlement was probably inhabited by the Przeworsk culture. It was an Iron Age archaeological culture between the 3rd century BC and the 5th century AD in what is now Poland and Transcarpathia.

Research in Lipnica Dolna, commissioned by the Regional Office for the Protection of Monuments, is carried out by archaeologists from the Subcarpathian Museum in Krosno.