Scientists: invasion of parrots in Poland is only a matter of time 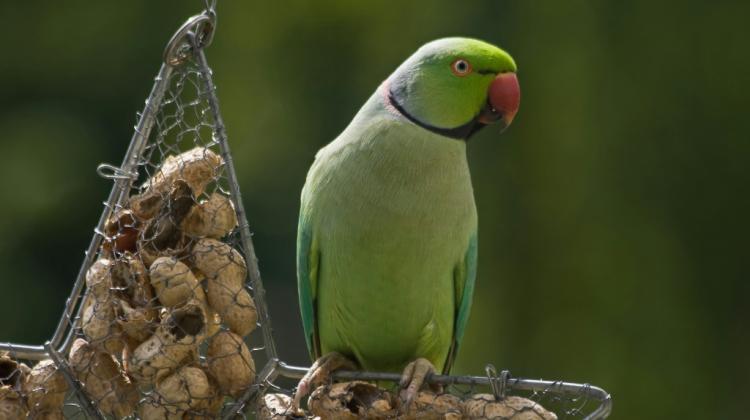 Appearance of wild large green parrots in Poland is a matter of time, experts say. In other countries, this bird today inflicts damage in agriculture and ecosystems. Zoologists from Poznań participate in EU research program concerning the exotic invasion.

Rose-ringed parakeets come from Africa and India. These big, colourful birds were first brought to Europe approx. 40 years ago. They have become popular because they are intelligent, easy to domesticate and willing to learn to imitate various sounds. It is estimated that 137 thousand of these birds were imported to the EU in the period 1996-2002.

Due to lack of attention or carelessness of people parrot began to slip away. Currently, they live in the wild in 35 countries on five continents, and in Europe alone their populations can be found in over a hundred cities. Their numbers are highest in the UK (a few years ago, the population was estimated at 10-20 thousand birds), Belgium (8.5 thousand), the Netherlands and Germany (5,5 thousand). Wild rose-ringed parakeets can also be found in Greece, Slovenia, Turkey and Israel.

Experience from the west and south of Europe shows that parrots adapt well to life in the wild. They are omnivorous. They quickly discovered the purpose of feeders (and drove away great tit and blue tit), and they tolerate frosts. "It is said that they can survive minus 20 degrees Celsius! Note that cities are warmer, there are heating pipes... There is a potential for parrots" - explained director of the Institute of Zoology, University of Life Sciences in Poznań, Prof. Piotr Tryjanowski.

Ornithologists note that parakeets nest in hollows and keep close to humans, they often live in areas where there anren’t any old trees and hollows. They burrow holes in the insulation of buildings, becoming a nuisance to building administrators and homeowners in many European cities.

In their natural habitats, parakeets are considered major bird pests. In India they destroy crops and plantations of sunflowers and date palms. The only European data on their harmfulness come from vineyards in the English county of Surrey, where is one winery they caused losses valued at approx. 5 thousand pounds per year. In the British Isles they pester so much that it is legally allowed to exterminate these parrots in places where they can cause damage or pose a threat - noted the ornithologist.

Another threat is that parakeets may be carriers of bacteria including those causing ornithosis (also in humans), an acute infectious disease of the respiratory system, and protozoa that cause cryptosporidiosis (gastrointestinal disease). They also carry a virus causing Newcastle disease in poultry. Its attack is the loss of the entire flock.

They also cause environmental problems, because in search of places to breed they compete with European species, for example woodpeckers, starlings and nuthatches. They win because they are bigger and stronger, but also because they start breeding in February, occupying hollows of birds that breed later.

According to the website of the EU project DAISIE (Delivering Alien Invasive Species In Europe, http://www.europe-aliens.org), methods to prevent or slow the invasion are unknown yet. Parrot have as many natural enemies in Europe as the other species (hawk and sparrow hawk, and crows, jackdaws and snakes can eat its eggs and chicks).

European experience with parakeet is so difficult that the parrot has been included in the list of one hundred most noxious invasive species, developed in the framework of DAISIE. The dynamics of the invasion and its consequences are also being monitored by ornithologists in the UK, Belgium, Germany and other countries as part of another program, ParrotNet EU COST Action.

Institute of Zoology of the University of Life Sciences in Poznań has joined the project, because - according to experts - is quite likely that parakeet will also colonize Poland. The warming and increasingly milder, shorter winters are favourable conditions. "From the scientific point of view, it is even more interesting because we can say we are waiting for the invasion, not only investigate the effects post factum. This allows to verify forecasting models" - explained the institute director, Prof. Tryjanowski.

"We primarily monitor the internet, because according to the Faunal Commission there were several observations in Poland" - said the ornithologist. In his opinion there is virtually no awareness of the problem, even among professionals. "We are only starting an information campaign" - he added.

Prof. Tryjanowski also wants to check how parrots are perceived in Poland. "Is the perception of parrots better in places where expansion has not started (yet): because they are pretty, colourful and do not cause problems... Because in places where there are too many of them, social opinions are already rather negative" - he said.

Rose-ringed parakeet is another species, which in the hands of breeders escaped into the wild and causes ruckus. In Poland, a growing problem is the red-eared slider - long-lived turtle from America, whose owners are counted in thousands. Bored owners often release their pets, which sometimes end up in the areas where our native pond turtles live. In the competition for food and resting places, red-eared slider wins. It can also transmit parasites and diseases to native species. For now, luckily, there were no reports of the species breeding in the wild.

Example of extremely problematic invasion of exotic "pets" comes from the USA. It concerns more than three meters long pythons from Asia, mainly in the context of the invasion in the Everglades National Park in Florida. The first python was spotted there in 1979. The plague was announced in 2001. Their population is out of control, estimated at tens of thousands snakes. Reptiles breed quickly and wreak havoc among birds, often representing endangered species. Their success may explain the reduction in the population of small mammals, for example weasel and raccoon.

In addition to warming, species invasions are considered to be among the changes in the environment that are most difficult to reverse.