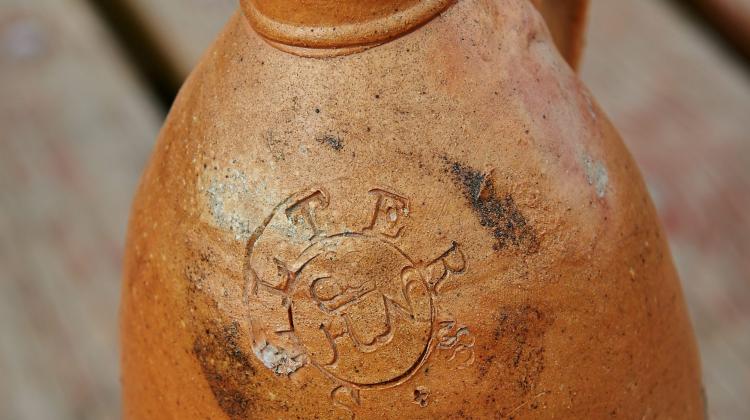 Stoneware bottle recovered from the wreckage of a sailing ship, which approx. 200 years ago sank in the Gulf of Gdańsk, contains 14% alcohol - determined experts who examined the contents of the vessel. It could be a type of gin. Details will be known after further studies.

The bottle has been recovered from the wreck, which rests on the bottom of the Gulf, at a depth of 12 meters, approx 4 km east of Gdynia Orłowo. The remains of the ship were discovered last year, during a routine survey of the bottom, by the staff of the Maritime Office in Gdynia. They notified the archaeologists from the National Maritime Museum, who in June and July conducted a survey of the wreck with the help of divers.

Archaeologists recovered parts of the ship, including wooden blocks, but also fragments and whole specimens of ceramic and metal vessels, including a 30 cm high bottle. Stoneware dish was perfectly preserved and corked, and embossed writing "Selters" suggested that inside might be soda water produced for several centuries near the village of the same name in the Taunus mountain range in Germany.

In early July, archaeologists transferred the bottle to research laboratory J.S. Hamilton in Gdynia. On Wednesday, experts issued a preliminary opinion on the contents of the vessel. "They have found that the bottle contains 14% percent alcohol distillate, possibly diluted with water, whose chemical composition corresponds to that of Selters soda" - told PAP Tomasz Bednarz, archaeologist with the National Maritime Museum, who led the work on the wreck.

Bednarz added that according to the laboratory staff, the alcohol may be a kind of genever gin (jenever) - traditional liquor of the Netherlands and Belgium. "Did someone really pour this drink into a soda bottle, or are we dealing with a different beverage? Experts will try to determine this in another series of analyses, which will be completed in early September" - said Bednarz.

The archaeologist added that according to laboratory workers, the alcohol in the bottle is suitable for drinking. "This means, it would not cause poisoning. Apparently, however, it does not smell particularly good" - he explained.

Bednarz added that finding a corked stoneware bottle caused a sensation in the Polish but also German and even English media. The archaeologists were also contacted by the mayor of Selters, in which town there is a museum devoted to the water: he sent a gift book about Selters water.

Bednarz explained that according to the latest findings, stoneware bottle recovered from the Gulf of Gdańsk was made in Ransbach, approx. 40 km from Selters springs. "The manufacturer was determined by reading the print under the main emblem +Selters HN+: letter R and the number 25, denoting the number of the manufacturer. In the years 1806-1830, when such bottles were produced, all the small shops in the area of the Taunus mountains made a total of about two million of these vessels" - said Cooper.

Stoneware bottle was not the first vessel with the contents of that recovered from the seabed by underwater archaeologists from the National Maritime Museum. In 2009, during the exploration of another wreck, the researchers found two, also approx. 200-year-old, surprises: a large stoneware jar that contained butter and a bottle of beer. Of course, the products were not preserved.

Studies of the wreck, from which the stoneware bottle was recovered, were carried out in a project financed by the Ministry of Culture and National Heritage. Archaeologists believe that the vessel was built in the early nineteenth century and was used to transport goods locally in the waters of the Gulf of Gdańsk. The specific design of the ship and a large number of stones found in the wreckage suggest that it was used to carry this building material. Archaeologists called the wreck "Głazik" (little rock).