Archaeologists will look for knights' weapons in the lakes around Grunwald 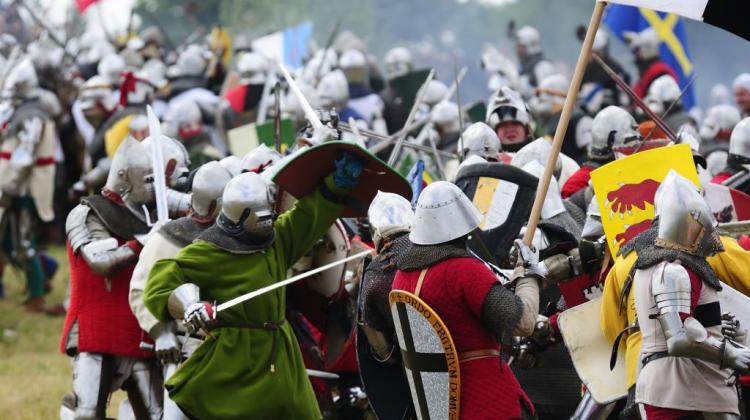 Could the army of King Jagiello leave armament on the way to Grunwald, the place of battle with the Teutonic Knights in 1410? Archaeologists will look for an answer to this question. In autumn they will begin searching two lakes, Lubień and Gardyny.

Dr. Sławomir Moćkun of the Museum of the Battle of Grunwald told PAP that the penetration of the lakes will be part of a large archaeological exploration conducted in September in an area of about 500 hectares in the vicinity of Grunwald by Polish archaeologists together with Norwegian and Danish researchers specializing in search with detectors.

Archaeological studies will cover the castle of the Teutonic Order in Gardyny, which was burned by the king’s troops on the way from Dąbrówno to Grunwald, and two nearby lakes.

"The lakes will be searched with an electromagnet. It will be lowered into the water and dragged along the bottom. It may collect interesting objects from the bottom, such as weapons. We are hoping to find something interesting, something that could fall into the water during stops, or be sunk by the Teutonic Knights" - explained Dr. Moćkun.

In the 60 military divers scoured the lakes, but nothing of interest was found. "But since then search methods have changed, they have been perfected, so we are hoping for success" - said Moćkun. He added that the Danes who will take part in the search specialize in underwater archaeology and have had a lot of success in that area.

Director of the Museum of the Battle of Grunwald Dr. Szymon Drej reminded that before the army of King Jagiello reached Grunwald, the troops passed by Lidzbark Welski to reach Dąbrówno on July 13 and capture it after a short siege.

"The army, led by the Polish monarch, moved with exemplary discipline, maintaining order and direction of the march - Malbork. When church robbers were caught in the camp, they had to hang themselves" - he emphasised.

The troops stopped for two days at Dąbrówno. Before dawn on July 15, Jagiello army broke camp and moved towards the sources Drwęca, north of Mielno. The march was interrupted when the troops encountered the army of the Teutonic Knights. In anticipation of the arrival of the stocks, the king ordered the set up camps. The royal tent was set-up. According to Dlugosz, it stood on a high hill, "facing the lake Lubień. Here, during Mass, the Polish king received the information about the approaching enemies".

The search in the Teutonic Knights castle in Gardyny and combing two lakes will be part of the autumn archaeological research conducted with the participation of the Poles, Danes, Norwegians and Lithuanians. The goal is to answer the questions, where exactly the Grunwald battle took place, and whether there is a chance to find the graves of the fallen knights of Grunwald.

Participants in this study will be to look for the Great Stream Valley, where, according to written sources, Allies clashed with the Teutonic. Danes and Norwegians will come to Grunwald equipped with metal detectors. The search will be conducted under the archaeological supervision.