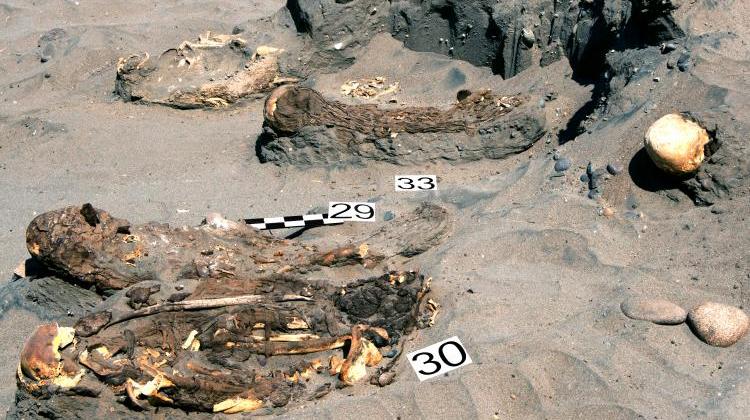 Archaeologists from the University of Wrocław discovered more than 150 graves belonging to a previously unknown culture in Peru. The find, dated to the 4th-7th century AD, indicates that the northern part of the Atacama Desert had been inhabited by a farming community before the expansion of the Tiwanaku civilization.

The team from Institute of Archaeology of the University of Wrocław has performed research in southern Peru since 2008. The cemetery was discovered in the Tambo River delta, in the northern part of the Atacama Desert. "These graves had been dug in the sand without any stone structures, and for this reason they were so difficult to locate that they have not fallen prey to robbers" - told PAP Prof. Józef Szykulski, leader of the research project, in which, in addition to Polish archaeologists, researchers from Peru and Colombia are also involved.

Desert conditions also preserved the contents of the graves. "These burials are of the virtually unknown people, who inhabited the area before the expansion of the Tiwanaku civilization. Items found in individual graves indicate that the people already had a clear social division" - said Prof. Szykulski.

In the tombs, archaeologists have found objects including massive headgear made of camelid wool, which could have the function of helmets. Some of the bodies were wrapped in mats, others in cotton burial shrouds, and others in nets, which means that one of the forms of activity of that culture was fishing.

"Inside some of the graves we have found bows and quivers with arrows tipped with obsidian heads. This is a very interesting find, because bows are a rarity in Peru" - said the archaeologist. Another interesting find is the skeleton of a young llama, which proves that the animal had been brought to the Tombo Delta earlier than thought.

In some graves of men, archaeologists found maces with stone or copper finials. "These objects and the bows were symbols of power, which proves that representatives of elite were buried here" - said Prof. Szykulski.

In the graves, archaeologists also found richly decorated weaving tools and many jewellery items, including objects made of copper and tumbaga - an alloy of gold and copper. Another interesting discovery are reed withes that were attached to the ears of the dead, which protruded above the surface of the graves. Scientists suspect that they served as ritual "communication" tools between the dead and the living members of the community.

Prof. Szykulski announced that Polish archaeologists also discovered the tombs of Tiwanaku civilization in the Tambo River delta, dating back to the 7th-10th century AD. "This stone tombs contain ceramic vessels, tools and weapons. This find is sensational, it was previously thought that in this period the Tiwanaku civilization had not reached this area"- said the scientist.

Archaeological work carried out in Peru by the Institute of Archaeology, University of Wrocław, is a part of the interdisciplinary research project aimed to analyse the settlement processes in the pre-Columbian era in the river valleys of the southern Peru. The project benefits from the financial support of BZ WBK, under the Santander Universidades program. Polish archaeologists cooperate with the Ministry of Culture of the Republic of Peru, the Catholic University of Santa Maria in Arequipa, and Municipalidad Provincial de Islay.

Prof. Szykulski reported that the Polish scientists would probably return to Peru in October.