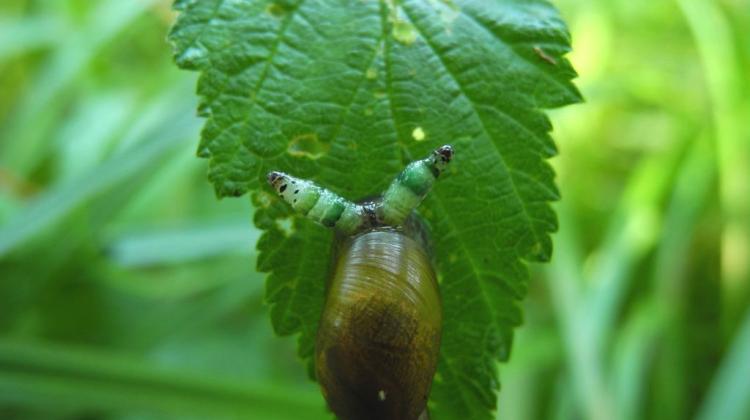 Snail with a parasitic flatworm. Photo by Prof. Helena Wesołowska.

The flatworm is an extremely insidious parasite. Not only that it makes snail eyes pulsate and appear as caterpillars, it also changes the host’s behaviour and exposes it to attack by insectivorous birds. The mechanism has been described by researchers from Wrocław.

The study of Prof. Helena Wanda Wesołowska and Prof. Tomasz Wesołowski from the Faculty of Biological Sciences, University of Wrocław, was published in March in the "Journal of Zoology".

Prof. Tomasz Wesołowski explained in an interview with PAP that the parasite - flatworm Leucochloridium paradoxum - has been known since the nineteenth century and it has been suspected for a long time that it must change the behaviour of its intermediate host, the amber snail. However, reliable scientific research on the topic has not been published before. Polish scientists are the first to describe how the flatworm changes the snail’s behaviour.

Snail infected with the parasite looks very distinctively (http://www.youtube.com/watch?v=EWB_COSUXMw). Its tentacles are significantly enlarged, with rhythmically pulsating coloured, ribbed outgrowths within them. This makes the tentacles resemble caterpillars crawling on a leaf and exposes the snail to the attacks of insectivorous birds that do not have snails in their menu. Flatworms use this mimicry to move from snails into birds - their ultimate hosts. There they reach the adult form and produce eggs.

Researchers from the University of Wrocław showed that snail infected with the parasite not only looks different than a healthy snail, but also behaves differently. Observations were carried out in the Bialowieża National Park. Scientists compared the behaviour of healthy amber snails (Succinea putris) and the snails infected with the parasite. Amber snails who carried flatworms were more often found on the higher parts of the plant, even on the topmost leaves and inflorescences, in well -lit places. They chose exposed places, uncovered by leaves, and were much more active. They could move even throughout the 45 min observation, and only occasionally hid their tentacles inside the body. All this meant that the "caterpillars" pulsing in the snail tentacles were more visible to insectivorous birds.

According to Prof. Wesołowski, adult flatworms are parasites of many birds, including tits, finches and flycatchers. Eggs escape in the droppings of birds. These droppings, rich in mineral salts, are the food of snails. The researcher described that flatworm inserts itself into the liver and prevents the snail from reproducing (thereby preserving the energy needed to sustain the parasite). The parasite gains weight and forms projections which can be seen from the outside as "pulsating caterpillars" in the snail’s tentacles.

Cheated bird does not eat the whole snail, and only tears off its tentacle. Both the snail and the flatworm survive the attack. After some time, the flatworm produces another outgrowth in its host and cheats more birds. Young flatworms are released in the gastrointestinal tract and undergo further stages of development in the bird’s intestine.

"The parasite does not have a single nerve cell, no sensory organs, but the tentacles pulsate only when exposed to light. We have no idea how this happens" - noted the scientist.

At the moment, mechanisms that make the snail change its behaviour under the influence of the flatworm are unknown. According to Prof. Wesołowski, one possible explanation is that the flatworm’s outgrowths are very close to the optic nerve of the snail. Snail carrying the parasite has impaired vision. To maintain an adequate level of illumination, it enters the sunnier parts of the plant. The snail that must sustain the parasite, must also feed longer.