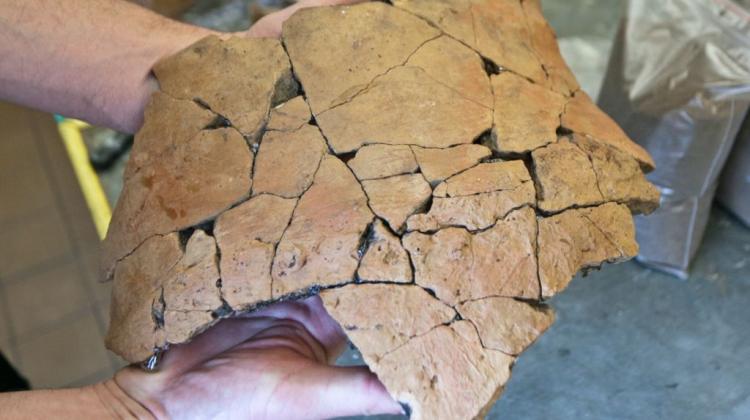 Processed pieces of pottery from the period of the Lusatian culture, discovered during excavations in Motylewo. Photo: PAP/Lech Muszyński 08.03.2014

Archaeologists discovered the remains of the Lusatian culture settlement during studies in Motylewo near Gorzów Wielkopolski. Valuable discovery are two pottery kilns containing vessels, whose age is estimated at about 3 thousand years.

"The uniqueness of these kilns lies in the fact that inside the firing chambers we have found several already fired vessels" - told PAP Paweł Kaźmierczak from the Lubusz Museum in Gorzów Wielkopolski.

To date, archaeologists on site have recorded forty other archaeological objects remaining after the prehistoric settlement, among them the remains of surface structures, storage pits and hearths. Several thousand pieces of pottery were dug up during the study.

Scientists are currently working on gluing the vessels back together. Among them is a large storage vessel ornamented with plastic strip. The remaining dozen vessels are slightly smaller.

"Several vessels were burnt probably during unsuccessful firing, and perhaps because of their deformation and surface burnt in fire the Lusatian potter left his treasures in the ground" - added Kaźmierczak.

The vessels found in kilns will be added to the collection of the Lubusz Museum in Gorzów Wielkopolski.

Excavations are carried out during the construction of the sewage system in the commune Bogdaniec near Gorzów.