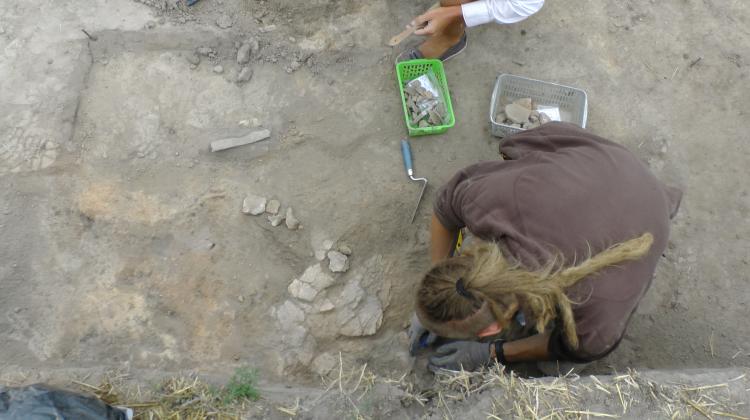 Excavations in the settlement Kakcus-Turjan. Photo by M. Jaeger

Archaeologists from Adam Mickiewicz University in Poznań have studied three settlements dating back about 4000 years in the region of Kakucs, about 40 km from the capital of Hungary - Budapest.

Polish researchers are interested in the Vatya culture (2000-1500/1400 BC). It occupied the central area of the Danube basin. It is known primarily from numerous, but poorly recognized archaeologically fortified settlements and cremation burial sites, often with hundreds of burials. At the end of the first half of the second millennium BC, the community has developed a rich production of bronze, probably entirely based on raw materials from remote areas of the Alps.

"These studies revealed that a relatively small region, contemporary settlements had completely different forms, fortifications were also erected differently. Strongholds were not located in similar geomorphological, and probably also environmental conditions" - explained Dr. Mateusz Jaeger of the Institute of European Culture AMU in Gniezno, leader of the project funded by the National Science Centre.

On the basis of the results of geophysical surveys, archaeologists decided to start excavations in Kakucs-Turján. In the first season, the pit was located in the place where building remains were clearly preserved. During the study, archaeologists found traces of pugging - a clay floor and numerous objects monuments made of various materials, including bronze and gold. Excavations allowed archaeologists to explore the stratigraphic system, buildup of land resulting from human settlement activity. This shed new light on a long and complicated history of the settlement, which began at the end of the Early Bronze Age - in the Hungarian terminology late third and early second millennium BC. The settlement was abandoned around 1500/1400 BC.

"Excavations have provided enormous number of objects, which is typical for multilayer sites. Firstly, there are thousands of pottery fragments, but also objects made of bone, antler, obsidian , stone, flint and metal. Compared with studies in Poland, the number of finds in such small area was huge"- said Dr. Jaeger.

An important part of research in season 2013 was collecting samples, to be subjected to expert analysis. Geochemical studies will be particularly important and allow researchers to better understand the origin of discovered layers.

Studies are carried out under the project "Open communities - closed spaces. Dynamics of fortified settlements, the economy and trans-regional relations in the Middle Bronze Age in the Kakucs region (Hungary)", funded by the National Science Centre. Involved in the project, alongside archaeologists from Poland, are researchers from the Hungarian Academy of Sciences in Budapest under the supervision of Dr. Gabriella Kulcsár, and Prof. Johannes Müller from Christian Albrecht University of Kiel.