Archaeologists in the military training area 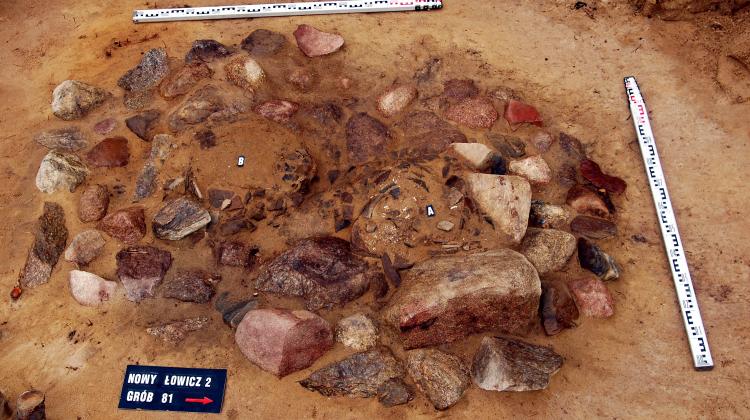 Dozens of prehistoric burials have been discovered by archaeologists during excavations in Nowy Łowicz in the biggest Polish military training area near Drawsko Pomorskie in West Pomerania. The study leaders were Dr. Adam Cieśliński of the Institute of Archaeology of the University of Warsaw and Andrzej Kasprzak of the Museum in Koszalin.

In the last three seasons, explored graves were mostly cremation graves of the Lusatian culture communities of the Bronze Age, from before 3 thousand years. Their number reaches 90. Last year, archaeologists found nearly 30 burials.

"The vast majority of cremated bodies were placed in urns. An interesting example is a double grave we discovered - two vessels filled with burnt bones were placed on pavement stone" - said Dr. Cieśliński.

The site in Nowy Łowicz is known primarily as a vast barrow burial site of Wielbark culture from before about 2 thousand years. The name of the archaeological culture describes a diverse community that included, among others, Germanic tribe of the Goths, accurately presented in written sources. As a result of studies that have continued for 25 years, 66 barrows of this type have been recorded, and in their interior or between them 300 skeletal and cremation graves. Most of the graves surveyed in the last season were located between the barrows. Some of the dead had been cremated, some placed directly in a specially prepared grave pit. Small dimensions of these pits caught the attention of archaeologists.

"We believe that these were children\'s burials. We found similar graves during previous excavation seasons. Until now, however, they were not in such a clear concentration. In light of previous studies of the Wielbark culture necropolises, we could only exceptionally identify separate areas reserved for children\'s burials, which makes our site particularly interesting" - said Dr. Cieśliński.

Inside the graves of the youngest, archaeologists found only modest equipment - a few items including glass beads, a clay cup and bronze fibula.

According to the researchers, excavations carried out in recent years have confirmed very high rank of the site in Nowy Łowicz. Almost complete unveiling of such a large barrow site is an exceptional situation in the study of the period of Roman influence in this part of Europe. It will allow to perform new and reliable analysis relating to the numbers and social structure of the contemporary population.

The last research season took place in July and August 2013. Research is conducted in cooperation of the Institute of Archaeology, University of Warsaw and Museum in Koszalin.