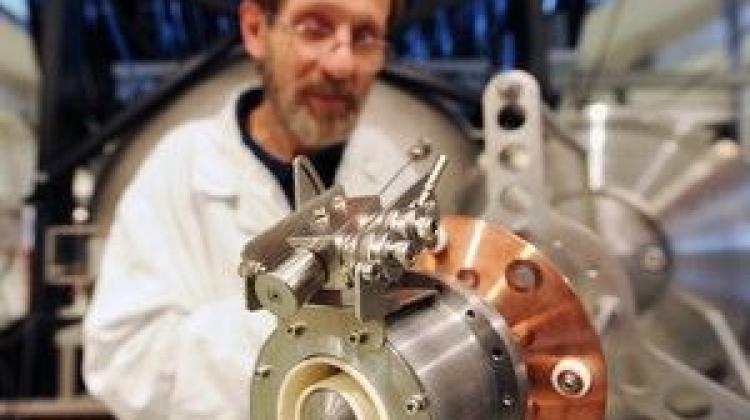 The prototype of the first Polish plasma thruster for space probes is already operational. It\'s been tested in conditions similar to those in space, anounced the Institute of Plasma Physics and Laser Microfusion.

Polish scientists at the Institute of Plasma Physics and Laser Microfusion (Instytut Fizyki Plazmy i Laserowej Mikrosyntezy, IFPiLM ) in Warsaw are working on a special thruster drive for space probes and satellites, which will be cheaper to operate than existing solutions.

The prototype has been tested in the laboratory of the European Space Agency (ESA - ESTEC) in Nordwijk, the Netherlands, in conditions similar to those in space. "During the experimental session, the thruster worked long enough to measure important parameters, such as thrust. We could talk about the first step on the way to success. Hassle-free engine surprised even experienced ESA staff. Normally the first run requires proper selection of the operating parameters of the system, determination of which a priori is complicated"- emphasized team leader, Dr. Jacek Kurzyna of IFPiLM.

The tested drive is a type of plasma electric propulsion Hall thruster. Such thrusters are successfully used in space - they maintain the desired orbit of satellites or change their orientation, they are also used propulsion in long-range probes. Due to the relatively low fuel "fuel" consumption, these drives are serious competitors to traditional rocket engines. For the same mission, a space rocket engine needs about ten times more fuel than a plasma thruster.

Weighing four kilograms, the thruster is cylindrically shaped with a diameter of 10 cm and has a length of 12 cm. Its maximum operational power is about half a kilowatt.

Polish scientists device generates enough thrust to work on satellites weighing up to about 100 kg. "The probe SMART- 1, which ESA has sent to the Moon orbit, had a xenon engine with a capacity of less than 2 kW. It could increase the probe speed by about 3.6 kilometers per second. Accordingly, our drive could also work as propulsion system in a small space probes" - said Dr. Serge Barral from IFPiLM.

The aim of researchers from IFPiLM is to build a Hall thruster that will be cheaper to run than those currently used. They plan to acheve this by useing krypton as working gas. This noble gas is up to 10 times cheaper than the most commonly used xenon - reads the note sent to the PAP by the Institute.

When designing the engine, in order to reduce costs and decrease the number of prototypes, the IFPiLM researchers conducted a series of computer simulations. This allowed to assess what components configuration would achieve the highest efficiency. For the simulation they used a program written by Dr. Serge Barral, one of the drive designers. The calculated efficiency of the drive prototype is consistent with the preliminary results of tests performed in the ESA laboratory and under the optimum conditions reaches 50 percent.

The first step - building the prototype thruster and its launch - has been made. After the first tests, the researchers are now awaiting the full test results developed by experts from ESA and continue to work on the next prototype. "Over the two weeks of the experimental session, we have made several measurements. We have a lot of data collected in the experiment, and their reliable processing takes time. ESA employees promised to send processed data in January" - said project participant, Jan Miedzik.

"The first tests of the prototype system showed where modifications are needeed. The most important and most difficult to design system component – magnetic circuit - work without problems, so we will try to achieve the same configuration in the next prototype" - explained team member responsible for the numerical modeling of the magnetic field in the Hall thruster, Dariusz Daniłko. Next year, another prototype will be tested, also in the ESA laboratory.

Recent experimental studies of Polish scientists can help reduce the operating cost of satellites and space probes that we use every day, often without realising it. Devices mounted on satellites are used for accurate weather forecasting, television broadcasting and transmission of telephone calls. With satellites, it was possible to create the GPS system. Importantly, data and call transmission over long distances is cheaper with satellites than terrestrial connections.

Design and construction of the first version of the electric Hall plasma thruster was funded by the Institute of Plasma Physics and Laser Microfusion. Tests at the ESA laboratory and construction of another prototype are financed from the budget of the KLIMT (Krypton Large Impulse Thruster) project carried out under the Agreement on the European Cooperating State between Poland and ESA.

Until now, Polish scientists did not have their own plasma thruster. The prototype, which is already operational, used for scientific research. In the future, its production is planned with the participation of industrial partners. The device can be used for tasks in space. The same IFPiLM team is working on another, much smaller thruster, which in the future will be applied on small probes or satellites such as the Polish satellite LEM.