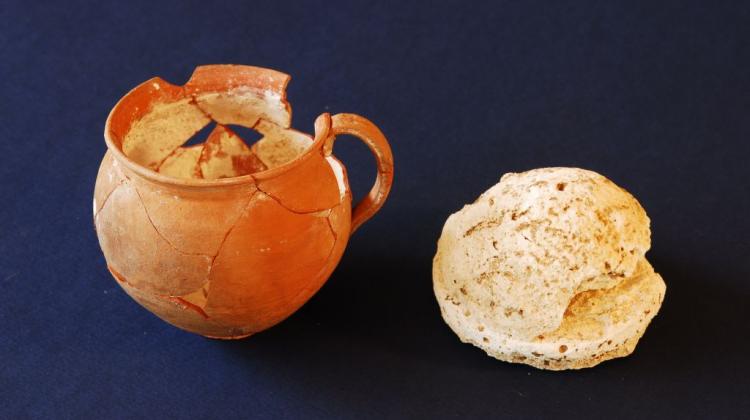 The barracks occupied by the 8th Roman legion of Augustus in the middle of the 1st century AD have been discovered by a team of researchers from the Antiquity of Southeastern Europe Research Centre, University of Warsaw, during the excavation in Novae near Svishtov, Bulgaria.

"The structure consisted of a series of segments of equal sizes. The segments consisted of one big and one small room, the dimensions of which underwent modifications in the subsequent phases of the settlement. The barrack was about 16 meters wide and 42 meters long" - explained Prof. Piotr Dyczek , head of the expedition.

The remains indicate that the support structure were large wooden poles, while smaller dowels sustained braid covered with soil. In the last phase, the exterior walls were covered with white plaster. The system of small dowels inside large rooms suggests, according to the researchers, that there could be bunk beds in the corners. There were wooden shelves in the vestibules.

Inside, archaeologists found volute oil lamps, glass vessels - bottles and wine cups. Part of the vessels are hand-made local vessels, so-called thracian urns with decoration in the form of imprinted rope. Archaeologists also discovered fragments of bronze vessels and other objects: buckles, pieces of armour, chandelier chains, folding bronze table base in the shape of a panther paw.

" One noteworthy group of objects are surgical instruments made of bronze. We could have found a legion doctor’s quarters" - added Prof. Dyczek.

For scientists, the barrack layout is a mystery. According to written sources, the first cohort should have a mirrored number of legionaries. This should be reflected in the architectural development. According to Prof. Dyczek, the latest discoveries in Novae are the first that could support the description of the written source, as that ancient record has not been confirm by any previous excavations.

"In addition, the dimensions of the larger rooms in the barracks we found, for Roman conditions and compared to ancient records, are very large. Formally, a sleeping room should be about 3.0 by 3.0 m, while in the case of our structure it is 3 by 4.5 m. This may indicate that the legionaries of the special unit were afforded more comfort" - concluded Prof. Dyczek.

This year\'s research season took place in August and September.