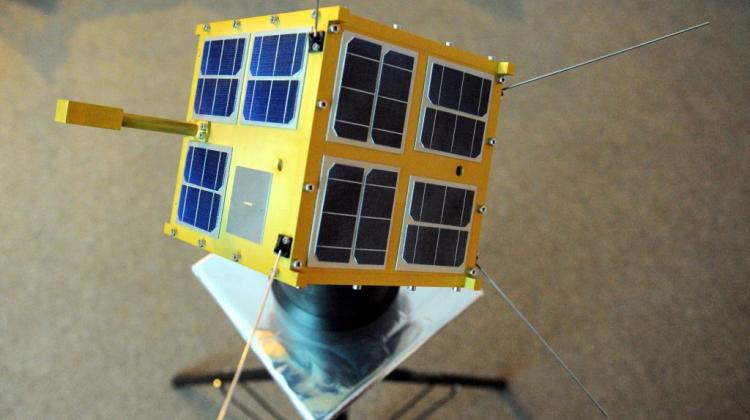 Lem and Hevelius are Polish scientific satellite, built for the international project BRIght Target Explorer Constellation - BRITE. Placed in orbit at an altitude of 800 km, for a few years the satellites will carry out precise measurements of 286 brightest stars in the sky.

The satellites have been built by specialists from the Space Research Centre PAS and the N.Copernicus Astronomical Centre PAS. In July, the official tender was announced for the launch of Hevelius.

Ultimately, the offer of China Great Wall Industry Corporation has been selected. This would allow to launch Hevelius on a rocket Long March LM-4 from one of the four launch sites in China. "The rocket had 30 launches into orbit, all 30 successfully completed. It is hard to imagine better statistics" - told PAP BRITE head of technology Dr. Piotr Orleański.

According to the Chinese proposal, Hevelius would be launched on December 10, but the agreement is still being negotiated. "In addition, until the Polish government agrees to export the satellite to China, there is no point discussing the launch. The final decision should be taken within a few weeks" - explained Dr. Orleański.

Scientists are now finishing the assembly of Hevelius, then it will need about two months of tests. Meanwhile, another Polish scientific satellite Lem is already on the shelf at the Space Research Centre PAS, ready and waiting for launch. "Lem has been with us for a year. From time to time we switch it on to check if it’s working, but really it could be packed and sent within a week" - said Dr. Orleański.

Lem will be launched on the Russian Dnepr rocket. "We are preparing to launch in November, but we are concerned that this start is not going to happen on time, because with the Russians everything is delayed" - Dr. Orleański told PAP.

Only after the launch of the rocket in August, preceding the launch of Lem, scientists will know if they can meet the November deadline. "If all goes according to plan, both Polish satellites could be launched with an interval of three weeks" - the researcher told PAP.

He noted that the delays of small device launches are very common. "When launching our small satellites, we use the +piggyback+ option. They are launched on rockets as cargo +attached+ to the launch of a larger satellite" - explained the scientist.

He said that the Chinese company, which will carry Hevelius into space, had 200 kg cargo load available on their the rocket. "Although they have not said that explicitly, they are doing everything to fill up those pounds. For that reason, they offer good prices and quick launch" - said Dr. Orleański.

Lem and Hevelius are so-called nanosatellites, satellites of a very small size. Until now, such small devices have been used only as an amateur and educational satellites. BRITE satellites are the first small objects to carry out a serious scientific task.

"They will be fitted with telescopes, basically ordinary cameras. Three of the six satellites will take pictures in red and three in blue. Such red and blue pairs will be pointed at a particular star for a time and measure how bright the star is" - described Marcin Stolarski of the Space Research Centre PAS in an interview with PAP.

The satellites need one hundred minutes to orbit the Earth. During this time they will communicate with ground stations in various locations, including Warsaw, Canada and Austria.